Darkmatters Review: The Book of Eli 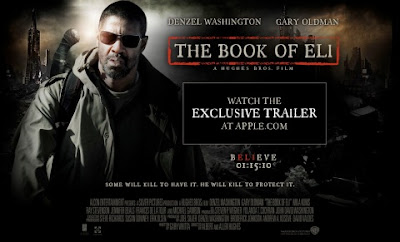 It’s the near future yet again and we’ve managed to wreck the world thanks to massive war which pretty much wiped out civilisation and left us in a Mad Max style wild wasteland. The law has collapsed, bandits rule the roads ruthlessly preying on travellers – and cannibalism is widespread in a world where food and water are now scarce.

Through this apocalyptic future comes a traveller by the name of Eli (a noble turn from Denzel Washington). Eli is a man on a mission to reach the West Coast of America, a trek that he has been on for 30 years, he carries with him a treasured possession – the very last copy of the bible. As a fellow bible carrier (on my iPhone at least) and fully signed up believer, The Book of Eli’s reverence for the Good Book is an interesting plot device.

It’s extremely rare to find a big budget Hollywood action film that takes religion quite as seriously as this and yet directors the Hughes Brothers have created a violent epic centred around a devout man of faith. Eli’s odyssey sees him having to fight, kill and kick copious amounts of ass, especially when he comes up against the evil Carnegie (a snarling Gary Oldman) who is the self appointed leader of a small west wild style town. Carnegie is a seeker of books – not just any books either – as demonstrated when one of his bandit biker gangs brings him a collection including ‘The Da Vinci Code’ which he immediately has burnt. He knows that the bible alone has the words which can sway people’s hearts and he wants to use it to bring order and control to his populace.

Caught up in the ensuing power struggle are Carnegie's daughter Solara (a spirited Mila Kunis) and her mother Claudia (Jennifer Beals) who both suffer at her deranged father's ways.
The gritty plot unfolds at a pleasing pace, building up to and beyond the climatic showdown between Eli and Carnegie. Action fans are well catered for with frequent burst of sensational ultra-violence, yet the film as a whole has a moral core message that will challenge all who see it.

The cinematography and look of the film are absolutely superb, the apocalypse has simply never looked so good, all shot in a super desaturated bleached palette that really sets this apart from inferior ‘near future’ efforts. Pick of the scenes for me was a five on one fight in shot in the silhouette of a highway underpass.

The Book of Eli is the first ‘must see’ action film of 2010, The Hughes Brothers have, as the Good Book might say, ‘fought the good fight, finished the race and kept the faith’ and have answered the prayers of action film fans.

For gamers, this is the nearest thing yet to a movie adaptation of Fallout 3 or Borderlands...Highly recommended viewing.

In a twist that didn't make the final cut... The Book of Eli turns out not to be the bible but the novel 'Darkmatters' - and it saves the world!? 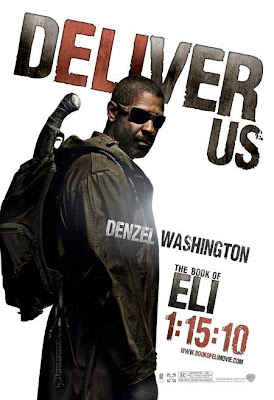 "The righteous shall kick the ass of the unrighteous"

Is there something connected with the Bible?