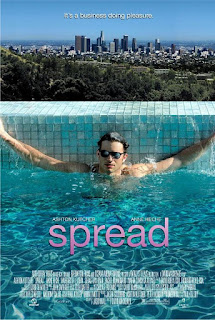 Spread sees Ashton Kutcher strut his stuff as a ‘himbo’ hustler named Nikki working the well pampered and preserved middle aged women of L.A. Nikki gives these ladies company and sexual gratification in return for a place to live and the use of credit cards… Everything seems to be funky (if utterly morally devoid) for him once he shacks up with his latest conquest / scam victim Samantha (Anne Heche who absolutely sizzles here).

But a chance encounter with hot waitress Heather (Maregarita Levieva) throws Nikki into a state of uncertainty as he might just have actually fallen in love!? From then on the film gallops towards what would normally be a sickly sweet ending with our lovelorn hero racing across the country to New York with a wedding ring in order to try and make a life changing commitment to Heather.  British director David ‘Hallam Foe’ Mackenzie has other ideas however and to his credit Spread ends up being a refreshing alternative take on the usual Hollywood depiction of course of true love. Could it be that the ultimate ‘player’ is about to get played himself?

is depicted as a place chuck full of vacuous pretty faces whose self-interests are rampant and non-negotiable. It is hard to imagine that Kutcher is having to stretch too far for this role which requires little more then getting naked often and generally acting like a selfish ass. He’s bit too convincing as he works his way through a variety of attractive women, with absolute no regard for their feelings (you can’t help wondering what Demi Moore will think when watching this).

Spread is a powerful film that makes a valid point about the repercussions of living without a moral compass, and how an existence of squalid, loveless sex can turn round and bite you on the bum when looking for real love. The 18 rating is justified by the overload of nudity here – especially from Anne Heche who appears to be vividly working her way through the Karma Sutra on screen.

This certainly isn’t a feel good movie, or a wise choice for anyone dating an older woman. Spread is worth seeing though if you’re not easily offended and looking for an antidote to the many weak romantic comedies out there that peddle their ‘happy ever after’ messages. 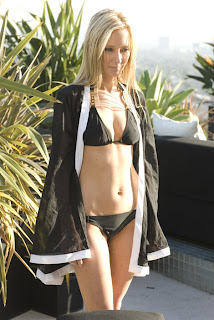