Darkmatters Review: The Other Guys 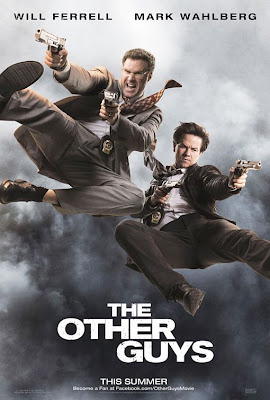 When New York’s finest hero cops (Samuel L. Jackson and Dwayne Johnson) have their careers and lives cut tragically yet stupidly short – who is there to step up and take on the high profile criminals? Well, how about The Other Guys – these are the humble desk jockeys such as Allen Gamble (Will Ferrell) who loves nothing better than paperwork and his permanently angry partner Terry Hoitz (Mark Wahlberg) – who has been desk bound since accidentally shooting NYC’s top baseball player.

So we have the latest mismatched buddy cop comedy and it has a fantastic pedigree being from the makers of Anchor Man, Talladega Nights: The Ballad of Ricky Bobby and Step Brothers. The writers pull no punches in this Dirty Harry on acid – highly comic tale, often venturing into risqué territory that will hopefully go over the head of the 12 years who can see this.

Prius driving, gentle cop Gamble is reluctant to make the jump into the high risk front line action, much to the disdain of his partner Hoitz who has all the moves but no opportunity to use them.

Steve Coogan turns up as David Ershon a slimy investor / main bad guy, who is planning an illicit scheme to somehow pay back billions he owes to some very shady characters. All manner of craziness ensues as the ‘other guys’ try to trace the missing cash and bust Ershon, and whilst the film delivers tons of funnies, it also has some nicely kick ass action to back it up.

"The old 'ball and chain' - if only!?"
Will Ferrell can’t help but be funny and he is great value here, Wahlberg has to play the straight man (albeit a very angry straight man) and the pairing works well with some likeable chemistry worked up between the two cops.

If you’ve seen the trailer – you’ll know that Ferrell is married to the smoking-hot Dr. Sheila Gamble (Eva Mendes) but treats her as if she was a plain ‘ball and chain’ other half. It’s a great gag that really works but for me the funniest scenes are the flashbacks to Gamble’s college career as a pimp named "Gator."

Add in Captain Gene Mauch (Michael Keaton) who keeps inadvertently quoting TLC songs and a show stopping argument about who would win in a fight between a lion and a tuna and you’ve got more than enough comedy genius to put The Other Guys on your ‘to see’ list.

The Other Guys get into a street battle with rival goofball cops - Bruce Willis and Tracey Morgan for COP OUT, the only way to find out who are the 'top dogs' is a laugh off... The COP OUT fellas take the honours...

Email ThisBlogThis!Share to TwitterShare to FacebookShare to Pinterest
Labels: film review, matt adcock, the other guys