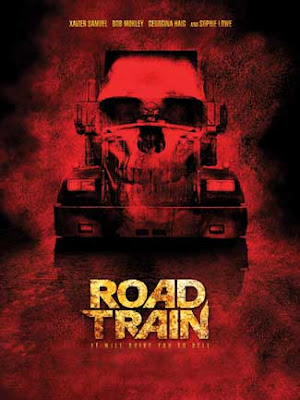 The Australian outback can be an unforgiving place at the best of times. It’s worse if you have the demonic big brother of Spielberg’s Duel truck trying to ram you off the road and drag you to hell.

Road Train (Road Kill if you’re in the US) features a fearsome truck that is basically 18 wheeled death to any who cross its path… And this heavy weapon of a vehicle is driven by diabolic forces beyond the comprehension of your average bunch of cute teens – which is why it’s not really a surprise when a young, dumb but cute looking bunch of teens run afoul of the smoke spewing beast.

Meet Marcus (Xavier Samuel) and Craig (Bob Morley) – two mates who have some girl issues – you see Marcus’ girlfriend, Liz (Georgina Haig), couldn’t resist getting it on with Craig and although in theory the two dudes are cool, there is still tension. Throw Craig’s hot new girlfriend, Nina (Sophie Lowe), into the mix – the film starts with them going for it hammer and tongs in their tent – and you know that things might go a bit awry.

However when the massive Road Train rams the teen’s jeep deep in the middle of nowhere – their life and death struggle takes over from their sexual politics. One thing leads to another and before you can say “that’s not a good idea” the teens climb aboard the supposedly driverless Road Train… That’s when the bad things really start to happen.

"Did you turn off on 'we're all going to die lane?'"
This isn’t your average straight to DVD horror effort; Road Train is actually gorgeously shot and boasts some truly stunning vistas / visuals which just add to the surprisingly compelling peril-em-up plot. Be prepared for some nasty surprises that take the movie out of pure road thriller and into a disturbed reality that wouldn’t be out of place in films like Jeepers Creepers et al.
The main star of the film is the monstrous rig itself – forget its crazed psycho driver, this Road Train lorry is a horror icon in the making. There are some seriously grim secrets about the inner workings of this beast – and it packs a driver / vehicle connection not normally seen outside of Top Gear and The Stig…

Road Train is a fun thrill ride that will please horror fans and road movie lovers with strong stomachs alike. It might make you look twice in your rear view mirror next time a huge HGV pulls up behind you too!!