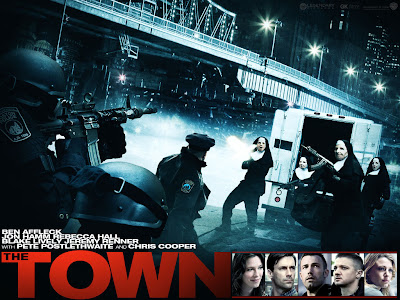 Even in Luton it’s not everyday that you see a speeding carload of nuns packing heavy-duty combat machine guns making a desperate getaway from hundreds of furious cops. But this is exactly the kick-ass sort of scene that The Town delivers – making it easily the best cops and robbers action thriller for some time.

If you’re looking for a quality heist-em-up then you might not necessarily think Ben Affleck is your ‘go to’ guy, but with The Town he follows up his excellent Gone Baby Gone with another superbly watchable film.

Affleck himself takes the lead role as Doug MacRay - the loveable ‘crook with a heart’ leader of a slick crew of bank robbers who are working their way through the armored-cars and financial targets of Boston. He’s on top form too, oozing stubbly charisma and scoring a genuine connection with viewers, perhaps Mr ‘plank’ Affleck is finally making amends for his earlier crimes against cinema such as Gigli or Pearl Harbour!? But it’s not just Ben who delivers here because The Town boasts a uniformly great cast including Rebecca Hall as Claire Keesey, the manager of one of the banks that Doug’s crew hit. Doug falls for her which leads to some very fraught situations as he begins to get torn between his heart and his loyalty to his friends.

The wild card in the mix is Doug's dangerous best friend Jeremy Renner (James Coughlin) – he’s a natural-born killer who likes to shoot first and worry about doing the time later. When Doug says: “We gotta do somethin'. I can't tell you what it is, you can never ask me about it after we're done, and we're gonna hurt some people.” James simply replies “Whose car we takin'?” He might be a thug but James is loyal to the crew and his sister is still in love with Doug which also complicates matters.

Take a trip to The Town for a full on, exciting, nerve shredding romp, packing some seriously cool shoot-outs which rival those of the crime epic Heat.

The crew from The Town are challenged to a 'heist-off' by the 'Takers' see review next week...