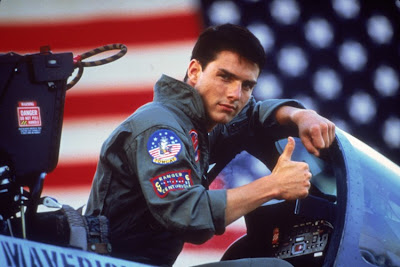 On March 3, 1969 the United States Navy established an elite school for the top one percent of its pilots. Its purpose was to teach the lost art of aerial combat and to ensure that the handful of men who graduated were the best fighter pilots in the world. They succeeded. Today, the Navy calls it Fighter Weapons School. The flyers call it: TOP GUN.

Top Gun is a not just a film, it is a classic, genre defining classic that put Tony Scott on the map as a director and cemented the iconic status of Tom Cruise.

Now PS3 owners have the honour of enlisting in a virtual Fighter Weapons School, taking to the skies as call-sign ‘Maverick’ and shouting “I feel the need, the need for speed!” at their HD TV…
Are you good enough to be counted amongst the best of the best? It’s time to strap in and find out! 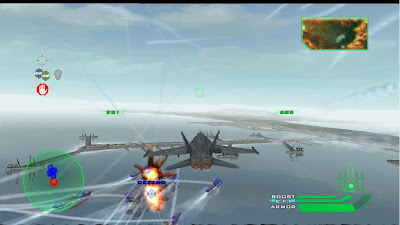 "This bogey's all over me..."
Top Gun is an arcade air combat game – don’t come here thinking that this is a hardcore flight simulator… This is a hardcore shoot-em-whilst-singing-along-to-the-official-soundtrack-em-up!! Homo-erotic volleyball games are not included…

Doublesix Games have gone ‘right into the danger zone’ with this one because if you mess with classics you mess with the massive devoted fan base (I’m one of them)… So the big question is – does it work?
In one way it really does – the basics of jumping into a jet, take to the skies and dogfight the living daylights out of enemies (first trainers such as the iconic Jester and Viper whilst at Top Gun), because those darn Russian MIGs are waiting to blow you out of the sky. The flying / aerial combat of the game works very well, it takes seconds to master the flying, and being an arcade game you get weapons that reload in flight and armour that mends itself!

"All the girls love a Top Gun!"
While playing – fans will be taken aback by the bastardised dialogue e.g. when Iceman somes over the radio saying “You two really are cowboys” and Maverick (you) should reply: “What's your problem, Kazanski?” – what happens here is you get Goose mumbling a half assed re-written version of your lines!? So when you’re expecting Iceman to follow up with: “You're everyone's problem. That's because every time you go up in the air, you're unsafe. I don't like you because you're dangerous.” You have to take matters into your own hands and shout over the rubbish that ‘Goose’ is responding to with: “That's right! Ice... man. I am dangerous.”
There are some really nice touches to the gameplay too such as CFI camera which allows you to track enemies as they turn and burn with the aim of getting a missile lock on your ass. You’ll soon be pulling things like ‘the gutsiest move I’ve ever seen man’ – if you do find yourself on the wrong end of a missile lock you do have counter measures which can be launched.

In addition to the main campaign, Top Gun also has a wicked ‘Horde’ mode where unending waves of enemies will come at you until you finally succumb to their bombardment.
There are even some multiplayer modes including aerial death matches and capture the flag, where sixteen players can take each other on. Good times!

Top Gun shoots down other arcade flight sims like the much more expensive HAWX 2 and gives the classic Warhawk a run for its money. For me this might not be the ‘best of the best’ but it is a great fun blast “Great balls of fire!”
Posted by Matt Adcock at 9:21 pm

This is a superb information and you have described everything very clearly and really i got a lot from this article, Thanks for spreading this information here, now i am going to bookmark this blog because i love to read this type of blogs.