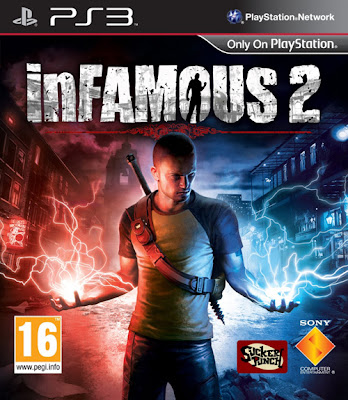 Hands up if you’ve ever fancied being a super powered being with the freedom to go where you want and unleash your unnatural powers on any unsuspecting citizen you happen upon… Yeah, me too!

inFamous was a kick ass PS3 exclusive that literally shocked people with its winning blend of electric powered heroics and real choice / implications of how things panned our depending on your moral choices of good or evil. Developer Sucker Punch realized they were onto a winner as the first game sold well and got a lot of love from gamers, So inevitably they’re back with inFamous 2 and they have changed things up just enough to make super hero fans tingle all over again.

Once again you get to play as the inFamous Cole MacGrath – who fresh from battling a freaky evil world destroyer known as ‘The Beast’ is given a serious beating and left to try and level up his powers in order to be ready for another crack at this powerful enemy. So it’s off to a new town (New Marais) which bears an uncanny similarity to New Orleans – in the kind of way that Empire City was a lot like NYC in inFamous.

Veterans of the first game are immediately rewarded with a Mass Effect chance to import their existing character – complete with good or evil preference. Don’t worry of you didn’t get chance to play the first inFamous though as the sequel stands alone very well too. The controls are intuitive and work well in the detailed sprawling open world (choc full of optional side missions – both from the game developers and even better – from players who have used the LittleBigPlanet style creation tools to make challenges for you to try that are impressive and creative in ways that only user generate content ever is!?

As you work your way through the main missions along with the side distractions the karma metre will kick in. This monitors your actions, tracking how good or evil you are being e.g. disabling and sucking the life force from people = bad, saving civilians from mugging or healing them who’ve been hurt = good.

Fill your karma metre with good and before long you’ll be able to access new ‘heroic ice’ powers and enjoy the adoration of the NPC people. But go psycho on the populace or openly attack cops and you’ll soon be feared and hated – but wielding some alternative ‘nasty fire’ powers.

The open city game area is a joy to move through as you can grind on electric cables, use your electro powers for small bursts of flight etc – all the while leaping and scrambling up buildings in an Assassin’s Creed style.

Everything about inFamous 2 is slick and well designed – it takes all the things that made the inFamous so great and makes them even better… The storyline feels well thought through and not just a cheap add on to make more cash, the graphics are lovely and the gameplay very satisfying.

I can’t inFamous 2 as it delivers on every count you could ask for (except maybe online multiplayer?). If you love open world games, super powers or just a great gaming experience, inFamous 2 is a tour-de-force of excellence that you owe it to yourself to invest in! 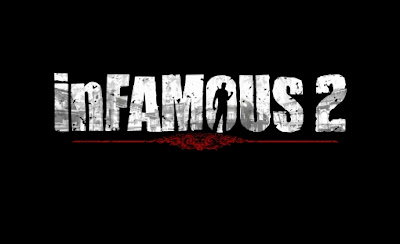 I'm still playing the original on occasion and can't WAIT to graduate on to this one.

I just reviewed this game.
http://destroyers-editorialsandreviews.blogspot.com/2011/10/infamous-2-review.html

I thought the first was better, but this was very good too.