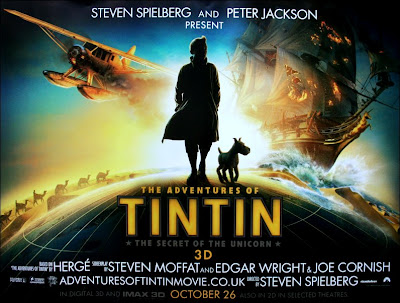 The Adventures of Tin Tin - The Secret of the Unicorn (PG)

Hold on to your hats, here’s the big CGI visual ‘leap’ which brings some seriously awesome graphics to the big screen and the result is absolutely jaw dropping.

In the capable hands of Spielberg – his follow up to Indiana Jones 4 – sees high adventure in amazing animated style. The Adventures of Tintin literally jumps from the pages of Hergé’s comic book series. The Secret of the Unicorn is a fun packed, family friendly romp, which has taken a long time to be realised in the manner that only the latest computer power can bring about.

It is a loving homage that I’m sure the original Belgian cartoonist would have been pleased with (alas he died before see this). Spielberg’s Tin Tin project benefits from having a cracking team of writers that include Steven Moffat, Edgar Wright and Joe Cornish. Tin Tin fans who have read ‘The Crab with the Golden Claws’, ‘The Secret of the Unicorn’ and ‘Red Rackham’s Treasure’, will recognise the highlight packed plot. The mixture of old school adventure and cutting edge visuals makes for a very enjoyable film – it even managed to amuse my teenage son which isn’t easy for anything other than Youtube or Facebook these days.

"shoot me first! save the boyish hero"

So young Tin Tin stumbles onto a secret which could lead to a lost treasure – there are nefarious forces also after the riches, so danger and death defying daring-do are the order of the day. Along for the ride is Tin Tin’s sidekick dog Snowy - who has a handy knack of saving the day, plus whiskey loving Captain Haddock (Andy Serkis) and the twin Interpol agents Thomson and Thompson (Simon Pegg and Nick Frost).

Bad guy of the piece is the Ivanovich Sakharine (Daniel Craig) who brings good dastardly counterbalance to the innocent faced Tin Tin and co. The action cracks along at a good pace and there are some lovely references to the original comics. So there really isn’t any good reason not to go and enjoy this rip-roaring adventure – even if it probably won’t be remembered as the classic that the makers were hoping it would be.

It does look like Tin Tin will be back soon though with Lord of the Rings director Peter Jackson already slated tackle the sequel.

Awesomeness öööö – some adventure chases on a par with Uncharted 3!?
Laughs ööö – some good laughs to be had
Horror ö – very mild darkness
Babes ö – this isn't that sort of eye-candy
Spiritual Enlightenment öö - comic adventures FTW
Posted by Matt Adcock at 10:48 pm

Too much of the film is set in darkness.
Why were so many characters given big noses...I don't remember that from the books.
And in the end Capt Haddock was manically unreliable without being in the slightest bit loveable or amusing.
I left about two-thirds way through.