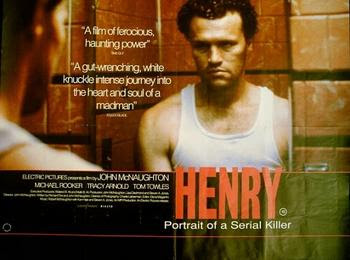 Hi, the name’s Henry and I’m your worst nightmare. See I like to kill people for kicks, you know - just for fun, or maybe just because they cross my path… women mostly and I don’t very much care for anything in this world. Hey but if you think I’m bad (and I am) you should meet my pal Otis (Tom Towles), I met that sick puppy in prison but you know something, perhaps his sister Becky (Tray Arnold) – she ain’t so bad…

Henry: Portrait of a Serial Killer is a low budget ($110,000) tale of the life and crimes / random horrific actions of Henry (Michael Rooker). This is a film that cuts through the layers of Hollywood gloss and high production values that help a viewer maintain a ‘safe’ distance from the action of most horror flicks. Presented in grubby16mm – even on Blu-ray it feels nasty and cheaply put together – which is part of the power packed by Director John McNaughton’s up close and personal account of a prolific serial killer.

Rooker is amazing in the lead role making Henry exude a weird negative charisma and total and utter disregard for the human life. A drifter who purposefully moves around and changes his methods of killing to avoid detection – he seemingly operates with impunity. The actions of Henry in the film are loosely based on real life serial killer Henry Lee Lucas but also bubble up from the black tar pit of McNaughton’s mind (he co-wrote it).

"mirror mirror on the wall - whos' the sickest of them all?"

You know you’re in for some of the most unpleasant but oddly compelling viewing ever committed to film when the opening scene is that of a naked woman, lying dead in a field. We are then introduced to Henry, who is going about his business. Interspersed with this are shots of other murder victims. None of the actual murders are shown, but accompanying the shots of the bodies are the sounds of screaming and struggle. Henry is also shown following a woman home and watching her as she enters her house.

It’s this matter of fact, impassive observational style that lends the film such a hard-hitting, disturbing edge. One scene where Henry and Otis kill a Fence for a larger TV than he was willing to sell them for their budget is a frightening ‘what if’ in light of the riots and looting this year. Are we in danger of sliding into a state where life is worth less than a bigger TV?

Henry: Portrait of a Serial Killer is an extreme film that will absolutely not be to many people’s tastes due to the sheer grimness of the subject matter. But for those who like their horror cold, hard and emotionally raw – the Blu-ray version delivers some serious chills and a warning that you just never know who that guy staring at you from across the car park really is thinking…

4 - this is one ‘Horrid Henry’ that really isn’t for kids.

Awesomeness öööö – if brutal random killings are your thing…
Laughs öö – very dark laughs in places
Horror ööööö – gruesome and unrelenting nastiness
Babes öö – girl next door looks (while she lives)
Spiritual Enlightenment öö – where does our respect for life come from?
Posted by Matt Adcock at 4:30 pm