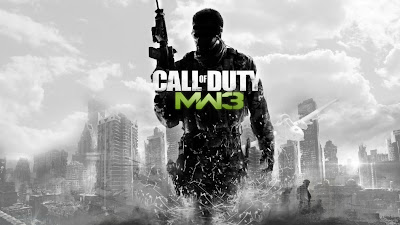 Call of Duty… those are words to conjure, words of power (marketing superpower)…

Modern Warfare… A literally game changing case study in how to shake up a stale genre and blow the bloody doors off the competition.

Can anything stand in the way of the megaton sales juggernaut that easy eclipses even the likes of Grand Theft Auto, Halo, Gran Turismo or World of Warcraft? Do insane numbers of copies shifted (COD4: MW c15million, MW2 c22million) equate to a great game? And can MW3 possibly live up to the sky high expectations of the estimated 6.5million people who pre-ordered the game and the similar number of additional buyers in the first week which could see over 12million sold?

So many questions but a few minutes after loading up Modern Warfare 3 and the answer is perfectly clear… There is no question... MW3 is awesome.

Having played through sections of the campaign and gotten my ass handed to me repeatedly in the slick and delicious multiplayer – there is absolutely no doubt in my mind that Modern Warfare 3 is the new AAA standard for shooters. Sure it doesn’t have a very open world to explore, no it hasn’t got lots of destructible scenery but what MW3 does have is balls out big bang explosive combat.

Campaign wise this is the end game of the loose MW trilogy - we’re talking a story told through the eyes of several characters, with nice cameos from some existing COD characters. Getting to control Task Force 141 Captain John "Soap" MacTavish (voiced by Kevin McKidd), again is like having an old friend back. SAS Captain John Price (Billy Murray) and Russian informant Nikolai, who are on the run after killing the rogue U.S. Army Lt. General Shepherd. Also back is Russian Ultranationalist Vladimir Makarov (Roman Varshavsky). The story of global conflict is strong, better than the recent Battlefield 3 campaign and absolutely choc full of OMG moments and set pieces which build up to a climax so grin enticingly nuts that you leave it physically exhausted but utterly satisfied… 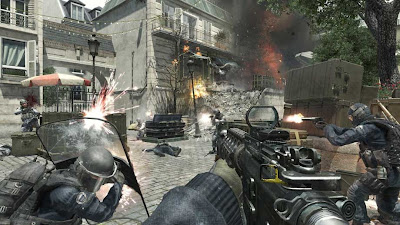 Infinity Ward know exactly how to please their game buying punters - Modern Warfare 3 is super refined in just about every area. The controls and damage to the player indicator via blood splatter on the screen are carried over from MW2 - all the basics are present and correct such as health regeneration over time and the choice of difficulty level.

The campaign is nicely diverse, one minute you’re on board a Russian submarine then after a frantic chase and some exposition you find yourself on a dusty African plane. There are wonderfully interwoven levels in London, France and Germany – and of course the US which is being invaded by the pesky Russians.

COD is only ever partly about the single player experience though and you’ll be delighted to know that the multiplayer elements of MW3 have been superbly overhauled. The Spec Ops mode returns – with Survival and Missions. Survival (think Horde mode) sees you taking on waves of enemies in co-op heaven. Mission mode is a series of challenges linked to the campaign – expect to be playing and replaying these to improve on your score.

The main multiplayer element is where Modern Warfare 3 really blows the competition out of the water…Pointstreaks replace Killstreaks so for those who suffer from terrible kill / death ratios all is not lost… You can earn the rewards by completing objectives which makes the game a lot more accessible to those guys who work hard to achieve the mission without notching up to many kills. As well as a new weapon customization system (they level up and get better the more you use them), you can also pick your own preference of strike packages – the rewards of noticing up points in game. 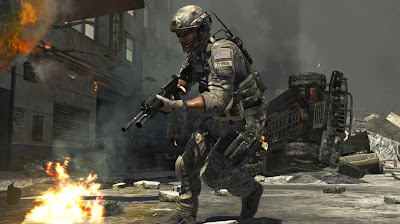 
Graphically MW3 is on a par with the best out there – in a very select league with only Uncharted 3, Killzone 3 and maybe Battlefield 3 - all the 3’s…

Other nice features include Facebook interaction with your online friends and super slick menus. You know it’s actually really hard to find fault with Modern Warfare 3, such is the thought and observation to detail on display.

If you buy one shooting game this Christmas, you’ll only be hurting yourself if it isn’t MW3.

5 - SUPERB - buy it on PS3 alongside Uncharted 3 and you'll have bagged the 2 best shooting experiences available on any console...

Check out the official site
Posted by Matt Adcock at 5:55 pm