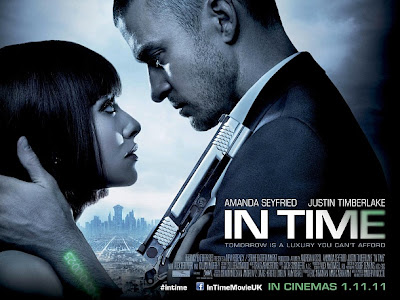 Humans have developed the technology to bio engineer ourselves so that we stop aging at 25. From that moment a timer kicks in and every second counts - any extra time for your life has to be ‘earned’.

So time is now the ultimate currency, pay your rent in months, your food in hours or minutes - working for your minutes and hours is the only way to stay alive – unless you happen to live in a rich zone where people have centuries of time on their clocks and only ever die if they are in a freak accident. 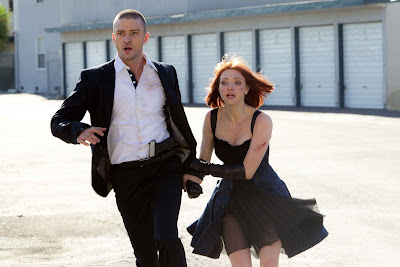 Meet Will Salas (Justin Timberlake) he’s a good looking blue collar guy from a poor zone who one day crosses paths with Henry Hamilton (Matt Bomer) – a wealthy chap who has lived so long that he now seeks death. Will wakes up to find that Henry has given him over a hundred years – and timed himself out – this Will a target for criminals and the ‘Time Keeping’ authorities led by Raymond Leon (Cillian Murphy),

After a high stakes poker game against big shot Philippe Weis (Vincent Kartheiser) Will meets Weis’s feisty daughter Sylvia (a sizzling turn from Amanda Seyfried). From then on it all goes a bit high tech Bonnie and Clyde with robberies and chases galore. In Time delivers a fun slice of sci-fi – the concept of having virtually a whole cast who look 25 years old is certainly easy on the eye and there is plenty of action to keep the plot cooking along nicely. 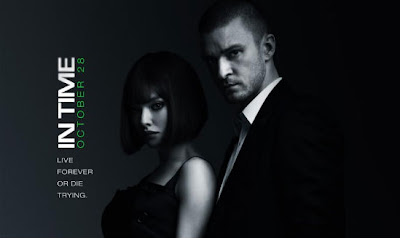 Director Niccol has form for sci-fi with both Gattaca and S1m0ne on his CV – and his next near future project called ‘The Host’ looks likely to be the pick of the bunch. Niccol obviously has a lot of fun here with really nice moments such as when Weis introduces his mother-in-law, wife, and daughter and Will really can’t tell which is which.

Timberland is good value as the everyman hero and he’s backed up well by the bug-eyed but equipped with a killer pair of legs Seyfried. The film rocks a believable not-too-distant future vibe and certainly adds food for thought about the issue of potential overpopulation etc. It also isn’t too nasty so those with young teens might find In Time a pleasing family bonding viewing experience.