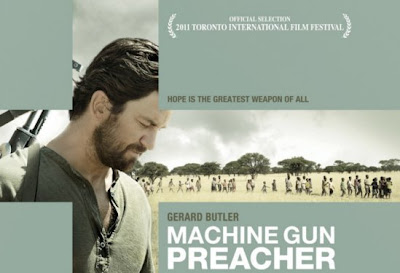 After renouncing his outlaw ways, Sam Childers (Gerard Butler) embarks on a spiritual path, becoming a warrior for the desperate and helpless children in a war-torn country in Africa.

As an ex-biker-gang member Sam makes the life-changing decision to go to East Africa to help repair homes destroyed by civil war, he is outraged by the unspeakable horrors faced by the region’s vulnerable populace, especially the children. Ignoring the warnings of more experienced aid workers, Sam breaks ground for an orphanage where it’s most needed—in the middle of territory controlled by the brutal Lord’s Resistance Army (LRA), a renegade militia that forces youngsters to become soldiers before they even reach their teens. Lots of issues worth exploring here... Check the trailer below and see what you think!?