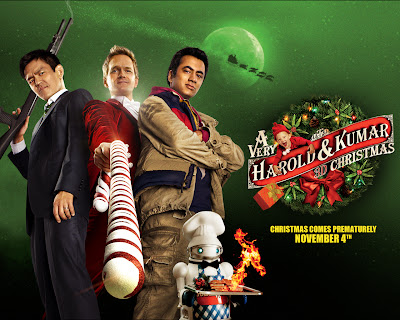 It’s Christmas time – there’s no need to be afraid.

At Christmas time, we let in light and banish shade…

Oh sorry, got a bit carried away there – but after seeing A Very Harold & Kumar 3D Christmas, it’s hard to not feel full of the joy of the Season. This madcap, drug fuelled sequel to the politically incorrect Harold & Kumar Escape form Guantanamo Bay ups the craziness, and brings sleigh loads of funnies.

The two ‘heroes’ get reunited by a mysterious present after a couple of years apart. Harold (John Cho) has moved on and grown up – working on Wall Street, his legendary weed smoking days behind him. Kumar (Kal Penn) however is still smoking and slacking his life away big time. A massive night of misadventure awaits as the twosome get embroiled in seriously messed up situation involving a burnt Christmas tree, Ukrainian mobsters, sex, drugs and shotguns…

A Very Harold & Kumar 3D Christmas really earns its 18 rating too – the plots goes off the deep end of ‘wrong’ when it tops the continual bawdy knob and sex references with a baby who inadvertently snorts cocaine, smokes weed and takes ecstasy. This isn’t a film for those of an easily offended nature!?

However dodgy the plot line it’s hard not to be swept up in the Christmassy fun, especially when Neal Patrick Harris makes the mother of all cameos with an absolutely insane Christmas show that serves as a way of shoehorning some up tempo Christmas carols into the mix. The whole 3D thing is a worked well too, I’m not really a fan of 3D movies but this one plays it for laughs and with everything from bodily fluids through to shotguns being shamelessly pointed right out of the screen.

Director Todd Strauss-Schulson holds nothing back, one minute we’re in a crazed frat party, the next sees the guys trying to infiltrate a Catholic church – each scenario treated with lashings of T & A.

If you’re in any way inebriated when you see this you well might freak out at the surreal Claymation sequence, which brings untold humorous gory death and destruction to the tale. Yes it’s entirely puerile but it’s also possibly rival Bridesmaids for the title of funniest film of 2011.

So if you need a family friendly Christmas movie – Arthur Christmas is you man, but for sheer tongue-in-cheek idiocy seeing A Very Harold & Kumar 3D Christmas will certainly fill you with Christmas cheer, dude.