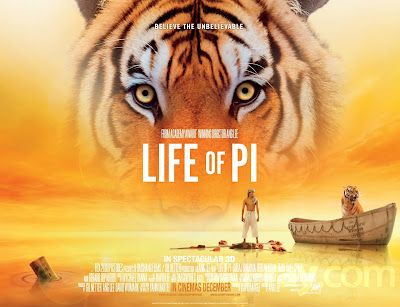 “An astounding story, courage and endurance unparalleled in the history of ship-wrecks. Very few castaways can claim to have survived so long alone at sea and none in the company of an adult Bengal tiger.”

Meet Piscine Molitor "Pi" Patel (Irrfan Khan) – an Indian boy raised as a Hindu, who as a teenager finds Christianity and then Islam too, he is so keen to know God he follows all three religions in order to find a deeper understand God through the unique lens of each theological interpretation. 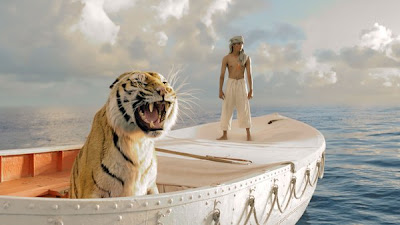 "Calvin and Hobbes on a boat"

Life of Pi is an incredibly deep and spiritual film but it is also very watchable and accessible thanks to some breath-taking visuals rendered in some of the best 3D ever committed to screen. This interpretation of the novel by Yann Martel’s is empowered by Ang ‘Brokeback Mountain’ Lee’s creative direction to create a fascinating survival tale not just of the body but also of the soul.

Young Pi (played for the ‘flashback’ sections of his shipwreck by newcomer Suraj Sharma), is a man cast adrift and tested to his wits end when he finds himself abandoned in a lifeboat with a Bengal tiger (named Richard Parker). Think Calvin and Hobbes writ large in a boat – only here the tiger companion isn’t a friendly feline – Richard Parker is a ferocious untamed beast… Watching the human / tiger interaction is spellbinding – helped enormously by the CGI effects which really are cutting edge. Parker is by far the best CGI creation ever to grace the screen, a living, breathing beastie with a real personality and soul, which should be far in excess of any non-speaking entity. There is a change to the original text where Pi has an imagined conversation with Parker…

Life of Pi is steeped in meditation and metaphor, it is a story that exclaims that it will make you believe in God as one of the characters says: “It’s a lot to take in, to figure out what it all means.” So there is plenty of musing to engage the spirit but there is also a decent amount of adrenalin inducing adventure to be had.

This is a soul surfing explosion of emotions – if there were to be a cash in sequel I’d vote they call it ‘Pi Hard – with a vengeance’!? But Life of Pi stands uniquely as a joyous tale that deserves to be witnessed on the biggest screen you can find – and don’t shirk the 3D option – I tell you this film is the testament that 3D doubters should witness not just to ‘see the light’ but to have the light reach right into your mind and monkey with your soul too…

Read another review of LIFE OF PI from Tom Wade at Cultureslap
Posted by Matt Adcock at 11:02 pm