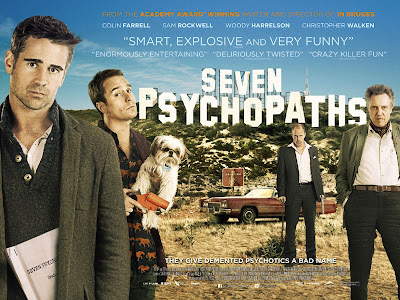 Q: How many psychopaths does it take to make a superb, clever, laugh-out-loud action comedy dog-nap-em-up?

A: Seven – yeah, the answer was in the title of the movie…

Here we have the righteous follow-up to the excellently quirky ‘In Bruges’ and it plays like no other film this year has even come to close to. Seven Psychopaths re-tells that well-worn movie plotline of a struggling writer trying to bring his screenplay to life but rather than being a ‘me too’ Adaptation, Barton Fink, The Player or even Synecdoche, New York - Seven Psychopaths blows the doors off the genre with an ultraviolent, feel-good romp.

Meet Marty (Colin Farrell) the alcohol hazed writer of a screenplay called Seven Psychopaths, the trouble is that he hasn’t actually thought up quite who the seven psychopaths are or what happens to them. As life would have it though - he becomes caught up in a dangerous dognapping escapade thanks to his pal, Billy (Sam Rockwell) and his partner in crime, Hans (Christopher Walken – who absolutely steals the whole movie). 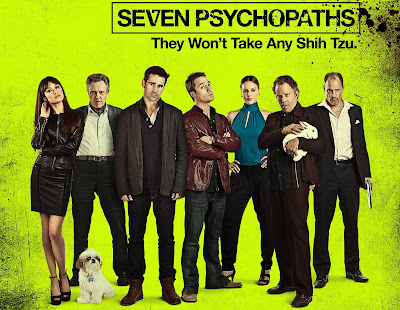 "which one is your favourite"

And before long he’s up to his neck in Shih Tzu thanks to Billy (Sam Rockwell) having abducted the little doggie of evil crime lord Charlie (Woody Harrelson), who is prepared to murder everyone in his path to get his canine pal back.

Seven Psychopaths packs some fantastic dialogue which covers rambling topics from Christianity, the nature of man and a ton of movie reference fun. The plot might be slight but the pace is frantic and the knockabout dark humour is spot on. Even at pushing two hours, there isn’t a single dull moment as the bumbling heroes stumble from one near death situation to another – all the while taking in colourful back stories of the titular Seven Psychopaths who include a vengeful Viet Cong soldier dressed as a priest (played by Long Nguyen), a serial killing couple – who stalk and kill other serial killers such as the legendary Zodiac and a Quaker (Harry Dean Stanton) on a murderous mission to avenge his daughter's death. 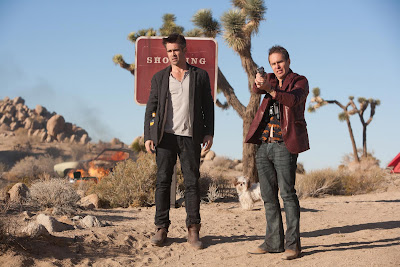 The women characters are especially hard done by though and include Marty’s bitchy girlfriend Kaya (Abbie Cornish), Billy’s untrustworthy girlfriend Angela (the gorgeous Olga Kurylenko) who is also sleeping with Charlie and an unnamed hooker (Christine Marzano). All of whom tend to get badly treated – a fact that is commented upon by other characters to Marty who they berate for not writing better female parts.

Seven Psychopaths is an excellent full frontal blast of Tarantino-esq pop culture and in-movie jokes that subverts every action kidnap thriller ever made and yet still manages to forge it’s own place in the ‘cult classic’ hall of fame. Highly recommended.

4.5 – Excellent work by all involved, recommended!


The babes of Seven Psychos...