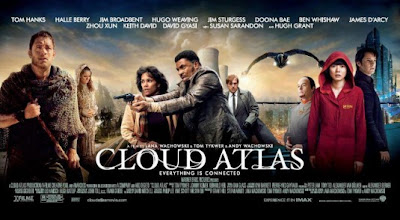 “Yesterday, I believe I would never have done what I did today. I feel like something important has happened to me. Is this possible?

Everything is connected in this bonkers, beautiful and totally awesome cinematic experience. Bringing David Mitchell's much acclaimed novel to the screen is a hard ask because it covers diverse stories spread across time from 1849, stopping at 1936, 1973, 2012, 2144, and finally a post-apocalyptic 2321... just not necessarily in order and the whole thing is introduced / ended from another time period even further in the future which forms a narration of sorts by a heavily tattooed Tribal Leader named Zach (Tom Hanks). 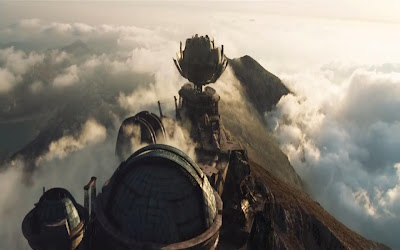 "not an out-take from MYST the game/film"

The title ‘Cloud Atlas’ comes from the a document used to classify cloud types and here the essence is of entwined plot strands, themes and voices which tie together to form a stunning whole.

Cloud Atlas has a fantastic mix of tales which encompass ‘The Pacific Journal of Adam Ewing’ which sees Jim Sturgess befriend a slave and get into a moral crisis, his journal is then found propping up a bed in the next timed zone where disgraced young composer Robert Frobisher (Ben Whishaw), seeks solace under the tutelage of Maestro Jim Broadbent and whilst there manages to compose his own "Cloud Atlas Sextet." This stunning piece of music pops up in the nicely named ‘Half-Lives: The First Luisa Rey Mystery’ where journalist (Halle Berry) is on the case of a nuclear power conspiracy... And so it goes with each sub story segment leaping to and fro – so you will need to pay attention. 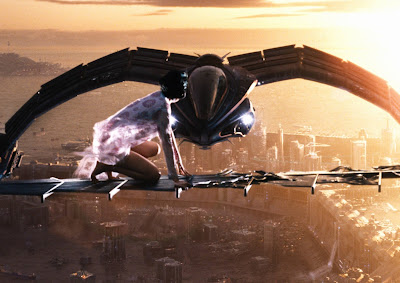 Comic relief is found in the ‘The Ghastly Ordeal of Timothy Cavendish’ where Broadbent’s bumbling Cavendish is tricked into a nursing home by his brother – and One Flew Over The Cuckoo’s Nest hijinks ensue, not least of which is the pleasure of seeing Hugo Weaving in drag as the evil Nurse Noakes.

It’s easy to spot the Matrix style visual flair of the Wachowskis in the 'An Orison of Sonmi~451’ which takes place in the Neo Seoul of 2144 and sees the lovely Doona Bae as a genetically-engineered worker clone. Rebel Commander Hae-Joo Chang is a Neo-alike hero adept at gunplay and generally being ‘cool’ – which is easy with the high-gloss CGI effects that put Cloud Atlas firmly into the sci-fi genre. 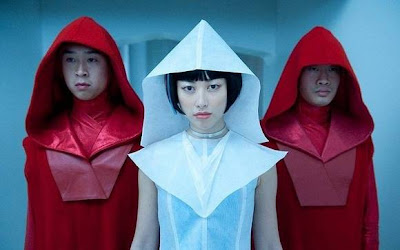 This is three hours of top entertainment that will stir your soul, dazzle your eyes and win your heart. A film that demands to be seen more than once and an early contender for film of the year.

Horror ööö – things get a little grim in places