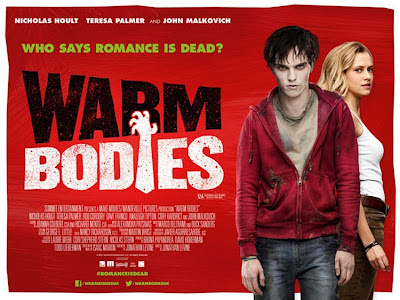 It’s often not easy winning the affections of girl of your dreams – but it’s a lot harder when you’re a decaying reanimated corpse with a passion for eating the brains of the living!?

That’s the plot of Warm Bodies though, based on the novel by Isaac Marion, which tells the tale of a love struck young zombie named ‘R’ (Nicholas Hoult) who might be dead and cold but he has the hots for the still living hottie Julie (Theresa ‘I Am Number Four’ Palmer).

Is there any way that these star-crossed lovers can overcome the small problem of one of them being dead? Is love really more powerful than death? Warm Bodies has a lot of fun finding out – in the very capable hands of director Jonathan ‘All The Boys Love Mandy Lane’ Levine – this is the smartest, funniest zombie-em-up since Zombieland or Shaun of the Dead.

‘R’- a not so subtle reference to Romeo - is probably the most sympathetic cinematic zombie ever – he provides a superb, witty and eloquent voiceover – filing in the viewers as to the apocalyptic situation where the majority of the populace have been turned into shuffling undead. There are also the ‘bonies’ – nastier feral undead skeletons who have lost traces of their humanity and who pose a threat not just to humans but to the zombies too.

The course of true love does not run smooth however and it seems unlikely that R will win Julie’s heart as the first time they meet he ends up killing her boyfriend and eating his brains. If you’ve ever wondered why zombies are so keen on brains R explains that it is because it allows them to glimpse memories of the person whose brain they are munching on – which makes them feel ‘less dead’.

Warm Bodies gets the balance of romance, comedy and action just right – the big picture plot of how Julie and R’s relationship might just save humanity sits within a strong paranoid threat that the last humans won’t be able to hold out as the resources begin to run dry. 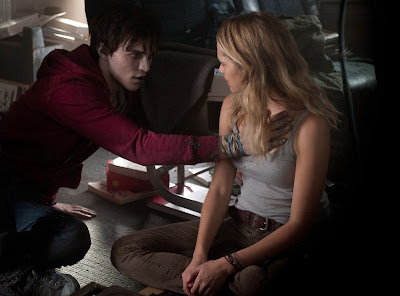 This is a wicked riff on the classic Romeo and Juliet plot which will resonate with fans of Twilight as much as those who like more hardened horror / comedy. Shakespeare probably didn’t see brains as the food of love but Warm Bodies delivers such a feel good jolt of reanimation for the romance genre that it deserves to be a hit.

öööö -  Excellent fun and full of heart too!

"miss Palmer bends over backwards to promote the film!"