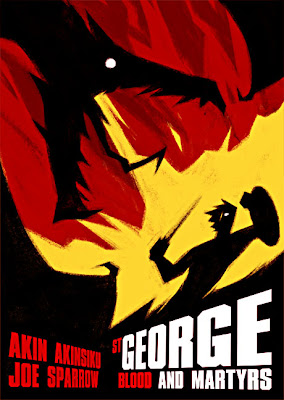 Is there history coded in the famous legend of St George and the Dragon?

Did you know that in around 300AD when the Roman empire was busy persecuting Christians in some areas whilst adopting their faith in others and at some point there was a serious shift in perceptions... As they said in Mad Max - one man can make a difference!?

St George was potentially that man and in this cool street art / Manga style graphic novel the Patron Saint of England is imagined as a Roman career soldier who converted to Christianity and who changed the course of history as a result... 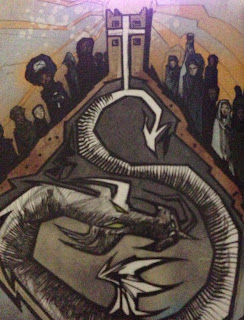 If you've read The Manga Bible by the awesome SIKU you'll be pleased to know that the art talent runs in the family as St George Blood And Martyrs is by his brother Akinsiku...

The artwork is fresh, stylish and compelling - and the collected tales, myth and legend are mixed well so that you come away actually having a better idea of how the fabled St George got his place in history.

This is an inspiring book, which should be picked up by those who like thier information delivered in graphic novel format.

But what about all that dragon stuff? Well, according to the 'Golden Legend', the narrative episode of Saint George and the Dragon took place in a place he called "Silene", in Libya; the Golden Legend is the first to place this legend in Libya as a sufficiently exotic locale, where a dragon might be found. In the tenth-century Georgian narrative, the place is the fictional city of Lasia, and it is the godless Emperor who is Selinus.

The town had a pond, as large as a lake, where a plague-bearing dragon dwelled that envenomed all the countryside. To appease the dragon, the people of Silene used to feed it two sheep every day, and when the sheep failed, they fed it their children, chosen by lottery. It happened that the lot fell on the king's daughter, who is in some versions of the story called Sadra. The king, distraught with grief, told the people they could have all his gold and silver and half of his kingdom if his daughter were spared; the people refused. The daughter was sent out to the lake, dressed as a bride, to be fed to the dragon.

Saint George by chance rode past the lake. The princess, trembling, sought to send him away, but George vowed to remain. The dragon reared out of the lake while they were conversing. Saint George fortified himself with the Sign of the Cross, charged it on horseback with his lance, and gave it a grievous wound. He then called to the princess to throw him her girdle, and he put it around the dragon's neck. When she did so, the dragon followed the girl like a meek beast on a leash.

The princess and Saint George led the dragon back to the city of Silene, where it terrified the people at its approach. But Saint George called out to them, saying that if they consented to become Christians and be baptised, he would slay the dragon before them. The king and the people of Silene converted to Christianity, George slew the dragon, and the body was carted out of the city on four ox-carts. "Fifteen thousand men baptized, without women and children." On the site where the dragon died, the king built a church to the Blessed Virgin Mary and Saint George, and from its altar a spring arose whose waters cured all disease...

Yeah - believe what you want of that but it's a great story (whatever the origins)!

öööö - The blood of the Saint runs wild here