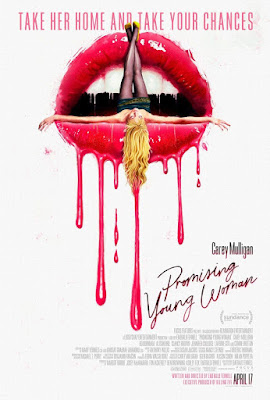 “Even though the gods are crazy / Even though the stars are blind / If you show me real love, baby / I'll show you mine / I can make it nice and naughty / Be the devil and angel, too / Got a heart and soul and body / Let's see what this love can do / Maybe I'm perfect for you…”

Arriving like a shotgun blast of expertly timed catharsis, Emerald Fennell’s Promising Young Woman hits hard with its message that claiming to be a ‘nice guy’ isn’t enough in this world where #MeToo still needs wider engagement.

Meet Cassandra (Carey Mulligan), she’s that girl over there in the bar who looks like she’s so drunk she can’t take care of herself. She’s beautifully dishevelled with her hair loose and her skirt hitched up. This is a woman who really needs someone to call her a reputable taxi and to make sure she gets home safely but having caught the attention of three guys across the bar, they are already discussing who should hit on her. Jerry (Adam Brody) goes up to her and offers ‘to see her home safely’ but somehow his definition of this is to take her back to his apartment and ply her with kumquat liqueur before forcibly getting her to his bed. Let’s just say that what happens next isn’t what he was expecting…

Following in the spirit of the excellent Hard Candy which tackled the thorny issue of creeps grooming underage girls online – only to end up as a semi-horror story when one girl decides to drug and castrate the seemingly charming scumbag. Promising Young Woman goes for the throat of guys who think they have a right to have sex with women who are too drunk to say ‘no’. 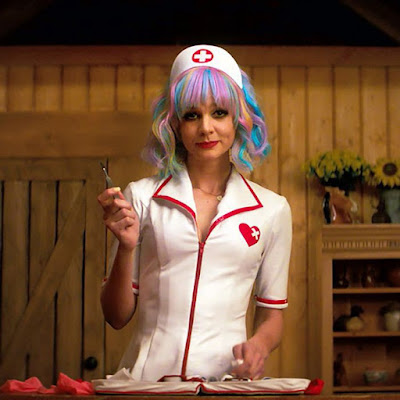 'this may sting a little'

Cassie is a real-life Harley Quinn-esque a really Promising Young Woman who doesn’t play by society’s rules. Having dropped out of medical school, she still lives with her parents – despite them getting her not-so-subtle birthday presents such as travel cases. She works in a dead-end coffee shop much to the annoyance of her boss (Laverne Cox) who keeps trying to get her to do more with her life.

When Cassie meets Ryan (Bo Burnham), a smooth-talking and seemingly genuine potential love interest it unbalances her even further. Can she learn to trust this guy who is prepared to woo her by dancing to Paris Hilton in a chemist shop?

It is a wild ride finding out and the action which gets dark in parts plays out to an excellent soundtrack – which features tracks that will stay with you after the credits roll including a great dark version of  Britney Spears’ Toxic and opens with Charli XCx's Boys...

Imagine a world where the earth is becoming a patriarchal living hell?

maybe click below to find out more in my dark sci-fi novel...