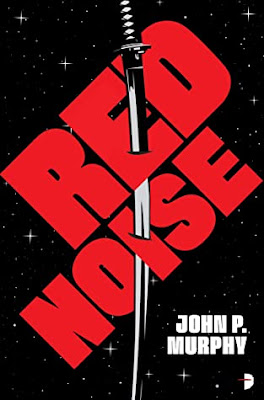 ...is a cracking space adventure and I'm a sucker for some star-based violence... Reminds me of Outland starring Sean Connery which is one of my fav sci-fi films being pretty much High Noon in space – and as a concept that works really well (a Marshal stationed at a mining colony on orbiting Jupiter is marked for assassination and must fight to survive). So it follows that transporting western plots to space which is the ultimate ‘wild frontier’ is a great idea, and here Red Noise takes the classic A Fist Full of Dollars (itself based on samurai legend Yojimbo) and sets it on ‘Station 35’ a godforsaken outpost where nothing good ever happens.

I got John the author to answer the Infamous Darkmatters questions - read on:

Matt: If scientists ever managed to create a giant mecha version of you – who or what would be your nemesis?
John: That depends, are we going literary or ironic? Literary, I'd probably have to fight a giant vampire sloth as a metaphor for overcoming being a lazy jerk. If we're going for irony, probably a swarm of tiny robots, since my doctoral thesis was on coordination and control of small robot systems. Either way my nemesis would probably be considered the "good guy", considering what I'd be tempted to get up to as a giant mecha me, but I'm at peace with that.
Matt: What is the most disturbing fictional scene you’ve ever read or watched in a book / film of any genre?
John: The rats in 1984. I can't even think about it. Gah, why did you make me think about it?
Matt: If you were hired to throw a parade of any scale or theme through the centre of London what type of parade would it be?
John: Well, the main purpose of me throwing a parade through London would be getting to actually see London, since I've never been. So maybe just like me in the Popemobile with a couple low-to-the-ground cars in front and behind so as not to obstruct the view. Maybe a live band on a float behind me, Dropkick Murphys or Flogging Molly or somebody like that. Not really for the theme, just, if someone else is paying I don't want to be fiddling with my iPod, you know?

Matt: You’re in a strange town with £100,000 that you have to spend in a single evening – talk me through what you get up to…
John: How strange a town are we talking here? I'm thinking some shopping to start. I'm not much of a clothes horse, and I'd want more time to consider electronics, but books and art would be nice - either for me or for gifts. Kind of a warm up, and kind of to know what I've got for the rest of the night. I always like the idea of buying art, and I can always pick out stuff that I'd like to have, but it's always so expensive. Ooh, and fossils. Where do you buy fossils? Not like a shark tooth or another damn ammonite, something with a skeleton.
After all that, I'd want to see a show or something. How do you spend a lot of money on that? Maybe book a private show for self and friends - a good magic act, maybe, that would be fun. Something with fire. But really: I couldn't live with myself burning through that kind of money and not having a REALLY nice dinner on it. Probably sushi, if I had my choice, but the most expensive restaurant in town if the pickings are slim. I'd bring friends and order just about everything on the menu. Just a little taste of everything. The first bite of anything is always the most delicious, right? Then, I think, a flight of the best whiskies in the place. I have to admit I have a preference for Irish or Japanese whiskies, or bourbons, over Scotch, but I'm willing to be won over. I'd probably buy a bottle or two of my favourites. Do they do gift certificates? We should do this again sometime.
Matt: Who inspires you most (can be living or dead)?
John: That's a hard question. I've gotten inspiration from a lot of corners over the years. I think if I had to name a person who's inspired me the most over the last year, it would have to be Stephen West, who hosts the podcast Philosophise This. For two reasons: first, I listened to the whole run from start to finish and came away with by brain absolutely buzzing with ideas and new perspectives. Second, what he's shared of his own journey of deciding to really dig into philosophy and make a living off of sharing it with the world, is really something.
Matt: There’s a masked assailant with a gun to your head, who is most likely to be under the mask?
John: Probably one of the yoga teachers at the school next to our office. Man, they're the worst. It's not my fault their students keep taking our (very few!) parking spots with their giant gas-guzzling SUVs adorned with "Namaste" bumper stickers. I'm just the poor jerk who has to go over there to complain about it. Maybe I'm projecting.
Matt: What is the meaning of life?
John: I don't think there is one, and isn't that a relief, really?
Matt: What was the best gift you’ve ever been given?
John: I suppose I should say something inspirational, like that one opportunity that made all the difference, or that one book that set me on the path to whatever, but probably it was my bathrobe. I've had it for like twenty-five years now. It's warm and it's comfortable and it has really nice pockets, and maybe it's falling apart a little at the seams, but I've hauled that thing all over the planet. It's a really nice bathrobe!
Matt: If you could have a sidekick robot – what would it be able to do for you?
John: Make really good coffee, clean up cat puke before I step in it, and poke me when I'm procrastinating. Oh, if it could make inconvenient phone calls for me too, that would be good.
Matt: What would you like written on your tombstone?
John: Haha, doesn't everyone want "vacant"? I like those old Victorian tombstones with the epigraphs that are basically all, "Yeah I'm dead but sooner or later you will be too, so don't look so smug." Maybe a carved raven looking severe. I guess you don't get many flowers that way though, mostly just goth teenagers coming around to awkwardly make out. That's not so bad, though, at least it's company.

SAMPLE IT, LOOP IT, EAT IT and LINK IT: