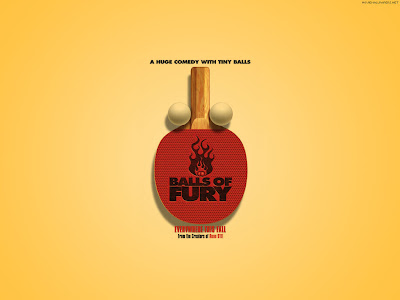 "can you spot the hidden symbolism in this poster?"

‘Balls’ is the word when it comes to Balls of Fury, a wacky comedy that sees down-and-out former professional ping-pong phenomenon, Randy Daytona (Dan Fogler), given a shot to redeem himself by entering the seedy world of underground table tennis.
Director Garant goes for sustained chuckles rather than belly laughs concocting a gleefully stupid tale that pits washed up Daytona against fiendish oriental crime lord Feng (Christopher Walken) who killed his father.
After being humiliated across the world as a child ping-pong Olympian, Daytona is marking time entertaining diners in a seedy Las Vegas joint when FBI Agent Ernie Rodriguez (George Lopez) recruits him for a secret mission.
The gorgeous Maggie ‘Die Hard 4.0’ Q is on hand as the convenient love interest – niece of the blind master ping-pong trainer Master Wong who is tasked with getting Daytona back to his best in order to infiltrate an illicit tournament organised by Feng.
Everything proceeds as you might expect, with too many ‘blind man hurts himself’ jokes to mention. There are groin related slapstick injuries and innuendo aplenty – the balls of the title being just too much of a gift to scriptwriters of such limited ability.
All the cast seem to be enjoying the proceedings – especially an impromptu sing along of Def Leopard’s Pour Some Sugar On Me, a rare highlight which doesn’t come till the end credits.
Christopher Walken sleepwalks through his part with the minimum of effort and looks to be just here for the paycheque, but even on autopilot he injects some quality into the cheap and cheerful comedy.
Balls of Fury isn’t in any danger of being a last minute entry into anyone’s top ten films of the year, but it does have its moments. Fogler works hard in the lead role and he manages to keep you onside more than in his last outing – the terrible Good Luck Chuck. If you like his work here, look out for Fanboys which looks like being fun too – the tale of a bunch of Star Wars fans who plan to steal an advance copy of The Phantom Menace from George Lucas.
So if you’re already bored with your Christmas presents and / or have an unnatural thing for ping-pong related antics, there are worse films out at the moment *cough* St Trinian’s *cough*.

Darkmatters ratings (look out for the all new DM ratings in January '08!!): 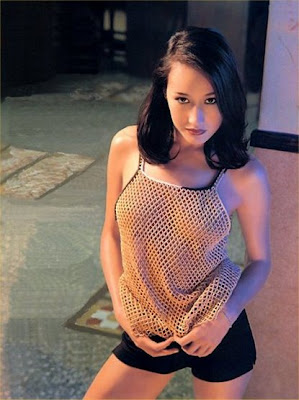 "Maggie Q... see what I mean about those shorts?"