Darkmatters Review: The Girl With All The Gifts

The Girl With All The Gifts

'When the key turns in the door, she stops counting and opens her eyes. Sergeant comes in with his gun and points it at her.Then two of Sergeant’s people come in and tighten and buckle the straps of the chair around Melanie’s wrists and ankles. There’s also a strap for her neck; they tighten that one last of all, when her hands and feet are fastened up all the way, and they always do it from behind. The strap is designed so they never have to put their hands in front of Melanie’s face. Melanie sometimes says, “I won’t bite.” She says it as a joke, but Sergeant’s people never laugh. Sergeant did once, the first time she said it, but it was a nasty laugh. And then he said, “Like we’d ever give you the chance, sugar plum.”'

If you don’t know where Hitchin is, it could be described as on ‘the ragged hinterland between Luton and Stevenage’ – which is exactly how it’s described in the heartrending dark near future thriller The Girl With All The Gifts by comic book writer and novelist Mike Cary (here under a new pen name M.R. Carey).

You see ‘Hotel Echo’ is one of the few remaining military outposts in a post apocalyptic existence and the base of operations where we initially meet young Melanie – the titular ‘girl’. Echo is a camp where they are conducting experiments on children. But these are not just average kids, no these children are no longer technically human.

The bad news for wider humanity is that we have been infected by a fungal like Ophiocordyceps Unilateralis – this is bad new because it turns you into a "hungry". No, not someone with the need for a cheeky Nandos, but rather one who loses their mental capacity and replaces it with a predatory need to feed on the flesh of healthy humans – thus spreading the disease spreads through blood and fluid. Making matters worse the fungal infection can also spread via spores created by the world conquering fungus.

Those plucky few surviving members of the human race either live in the massively-guarded ‘Beacon’ or have turned into “Junkers” - feral roaming Mad Max style packs ravaging what they can find on the land. 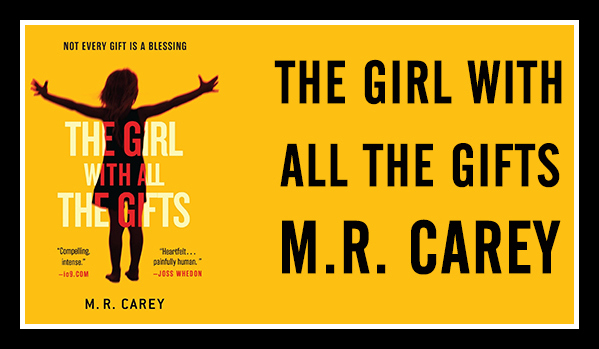 The school section of Hotel Echo is where the lovely Miss Justineau and team teach the special children – a select few hungries who have somehow kept their mental function and can communicate, think and learn – lapping up facts and fables such the Greek myths (Melanie’s favourites).

The soldiers including Sgt Parks don’t like the special 'gifted' kids – especially as they are the ones who have to go out on sorties to capture them and bring them back to base – you see another part of the camp is a laboratory where the hungry kids are dissected by the sadistically driven scientist Caroline Caldwell – a woman driven to try and find some kind of cure or vaccine, who believes that these children hold the key.

Carey is a ‘gift’-ed author and the narrative builds up a compelling, disturbing and utterly engrossing thrill ride that is anchored with an incredible authentic heart by the impossible friendship between Melanie and Miss Justineau.

When the action moves beyond the base The Girl With All The Gifts becomes a nerve-shredding tale of survival and heartbreak. But as well as horror thrills, this really is a beautiful novel too, one that sets an iconic new high bar for characters you’ll grow to care about, backed up by some of the best zombie-alike peril and terror ever committed to the page. Violent and grim in places, poignant and tender in others The Girl With All The Gifts is a book that will stay with you and could very well tear your soul apart. 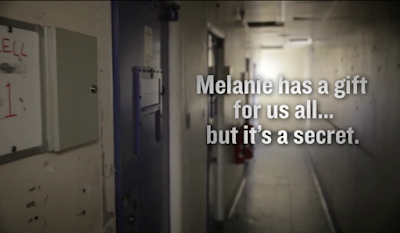 For folks like me who live near where much of the action is set, it adds amazing depth to know the roads being discussed e.g. ‘We verified a large group of hungries stationary in the Hitchin Road, close to the Airman roundabout. They were skin and bone mostly, but none of them looked too far gone to be a threat…’

Man it would be awesome to see this brought to the big screen!?

The Girl With All The Gifts is easily the best book of 2014, it’s a masterpiece and would make an incredible film, I can’t recommend it enough – this is a masterful ‘must read’!!