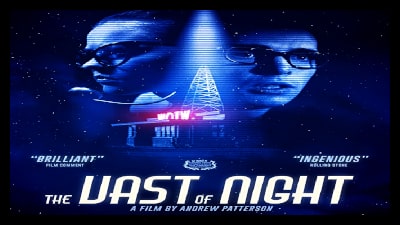 Here is a delicious little ‘old school’ sci-fi which takes us back to the UFO panic days of 1950s New Mexico. Heroes of the piece are Fay (Sierra McCormick) who operates the telephone switchboard and small-town radio DJ Everett (Horowitz). We get to join them on one fateful night where they pick up a strange audio frequency – which might not be of this world…

I really enjoyed The Vast Of Night - it’s a solid debut from first-time director Andrew Patterson. What it lacks in budget, it makes up with creative camera shots and a snappy plotline that doesn’t lag.
It opens with a very Twilight Zone spoof TV show: ‘Paradox Theater’ which effectively evokes a fun sci-fi 50s vibe which sets the tone beautifully. The film builds a nice eerie feel that is hard to explain and yet before you realise it you’ll be sucked in and on edge. 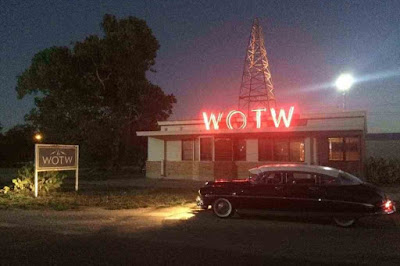 The film packs a smooth hit of Americana too – plus some the epic tracking shots, one of which creeps through an in action basketball game, weaving between the players before carrying on out into the streets with no noticeable break.

Don’t come expecting full aliens on the loose mayhem or schlocky body horror – this is a more psychological dread spectacle. As the two leads spark off each other with real chemistry, it’s hard not to start worrying for them as it seems that they are getting caught up in something dangerous and unworldly.

'nice night for a walk'

The Vast Of Night is a welcome and recommended addition to the sci-fi film canon, I’ll be excited to see what Patterson does next.

Horror öö – Nothing too grim

Men Cotton Jacket said...
This comment has been removed by a blog administrator.
10:55 am