Matt is smited by a Mad God (review) 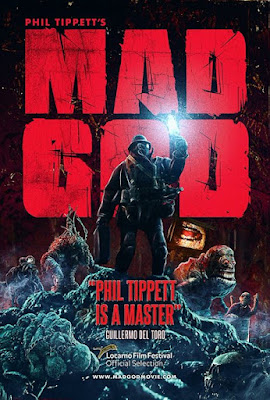 You are not ready for this - join a character only known as 'The Assassin' as he battles through a forbidding world of tortured souls, decrepit bunkers, and wretched monstrosities forged from the most primordial horrors of the subconscious mind. Directed by Phil Tippett (Star Wars, Robocop 2, Jurassic Park), the world's pre-eminent stop motion animator, every set, creature, and effigy in this macabre masterpiece is painstakingly animated using traditional stop-motion techniques.
Yes, that's right - MAD GOD is a fully practical stop-motion film set in a Miltonesque world of monsters, mad scientists, and war pigs. That's about all there is in terms of plot - something about The Assassin trying to follow a disintegrating map, being captured and passing the batten on to fellew assassin, but don't worry too much about that... 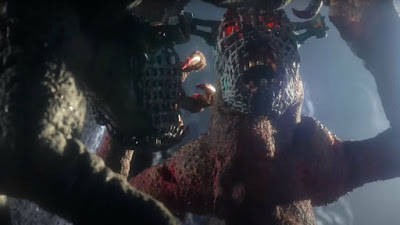 This is a film to open your mind to and let it do terrible things to your subconscious!
Background: In 1987, legendary visual effects and stop-motion craftsman Phil Tippett embarked upon an ambitious personal project, fabricating and animating a darkly surreal world in which the creatures and nightmares of his imagination could roam free. Phil produced dozens of environments and hundreds of puppets for the project, filling notebook after notebook with thousands of detailed sketches and storyboards.
It's hard to believe but each piece of MAD GOD is hand-crafted, independent and created from the heart. Sometimes that heart is bursting with love for the craft, while other times it's macabre, punctured, and bleeding. MAD GOD is a mature film crafted from techniques & technologies that span the history of cinema and the career of a true animation mastermind.
Out of a potential 5, you have to go with a Darkmatters:
ööööö

(5 - wow - let it do terrible things to your subconscious...)
Awesomeness ööööö – Freakshow in every sense of the word

Horror öööö – Visuals here that will disturb!
Spiritual Enlightenment öö - Only Mad Gods in the building