All I do each night is PREY (review) 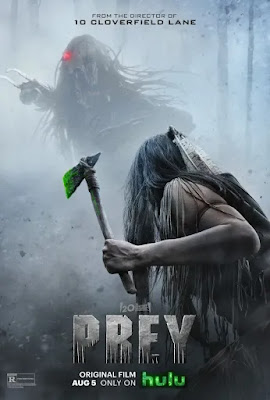 In a world full of prequels, one warrior stands above the rest… The word ‘prequel’ has often been tarnished, even some of the best film franchises have been cursed with prequels which have either been weak, rubbish or just mediocre cash grabs.

Prey is the latest to jump a much-loved series back in time – here is a prequel that tells the story of the first Predator visit to earth, some 300 years ago. So, is this Comanche vs space hunter effort another blot on the cinematic landscape? In a word ‘NO’, director Trachtenberg pulls off something incredible and manages to stay true to the essence of the 1980’s original. So strap in for stylish violence including graphic - predator fan-pleasing - brainstem ripping gore, nail-biting tension, tasty action and new characters that you’ll actually care about.

Meet Naru (Amber Midthunder), a young Comanche warrior and expert tracker whose has spent her life trying to prove herself to her tribe that she is worthy to be allowed to hunt. But the patriarchal tribal system is strong and try as she might – even almost taking down a lion on her own – she is not given a chance to do more than cook.

But when a ‘sign in the sky’ heralds something bigger, nastier and carrying some advanced weaponry coming into her tribe’s hunting grounds and killing their food supply, Naru might just be her people’s only hope and must find a way to combat this serious extra-terrestrial threat.

I’m delighted to say that Prey is absolutely badass, packing a level of gruesome endorphin rush that has been sorely missing from the decent but not-a-classic Predators and the wildly misfiring The Predator from Shane Black.

Prey brings us a Predator who is a primal killing machine in a skull mask and as is their way, keen to track and hunt everything in its path. There is so much to enjoy as the various wild beasties go up against the space warrior, a highlight being a grizzly bear vs predator one-on-one fight but when the action moves to human targets things really amp up. 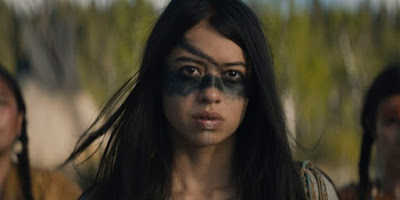 gothic face paints are very in...

The film is excellent at capturing the feeling of Native American customs and traditions and working them seamlessly into the plot. Naru wields a homemade axe-on-a-rope which is a fantastic weapon, the like of which Kratos from God of War might want to borrow. Throw some white, gun-totting trappers who aren’t big fans of the natives and stand back as the carnage kicks off in fine style.

There’s a feral majesty not just to the woodlands replete with wolves and picturesque acres of wildness, but also to the combat. The primal predator doesn’t have all the same weaponry as we’ve seen before but some staple things like the head-mounted 3 red dot target system is still in place.

Prey moves along a breathless pace and Midthunder is a charismatic and engaging lead. Her supporting cast might not get the same character development but this film is less a ‘team vs predator’ than a battle of wits between girl and monster.

Even if you only have a passing interest in the previous Predator films, Prey is absolutely worth seeking out – and if you’re a newcomer to the series then it’s an excellent place to start!

Out of a potential 5, you have to go with a Darkmatters:
ööööö

(5 - If it bleeds, we can enjoy seeing it battle…)
Awesomeness ööööö – The Predator is back in business baby!!