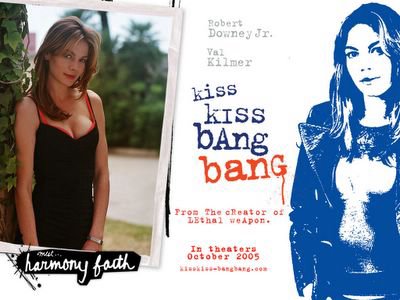 "Oh man... if you think she looks cute here - scroll down to the shot of her in her Santa outfit!!"

Shane Black I could just Kiss Kiss Bang Bang you for making this film… I have been a devout disciple of your work (writing credits at least) since your excellent 1987 Lethal Weapon… way to start a whole movie genre of tasty violence laced with buddy comedy… and even though the Lethal Weapons became rather less lethal and less funny as they progressed they did deliver a fairly consistent bang for the buck (and I don’t care what you say…Patsy Kensit’s topless / death in Pt 2 is still a classic movie scene). And you bestowed the rather cool The Long Kiss Goodnight and the absolutely geektasticly Bruciesome The Last Boy Scout – one of my all time favs…

So now you’ve finally stepped up and made your directorial debut and I’ll be gutted with a rusty chainsaw in some backwoods cabin if it isn’t an absolute cracker - a home run… What can I say – top stuff!!
Robert Downey Jr is back on the cool fast track thanks to his Harry Lockhart – hero / narrator and his genuine chemistry with co-star Val Kilmer is just great to behold (and I usually hate Kilmer with a vengeance). But most of the kudos has to go to the stunning Michelle Monaghan, ouch, she’s so hot in this film it shouldn’t be allowed… 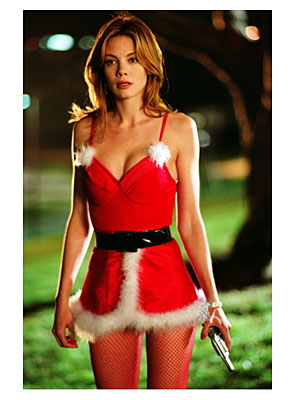 "Happy Christmas... virtually guaranteed wearing that!!"
So if you have even a passing interest in action, comedy or just excitingly fun thrillers - KKBB should certainly be a film you see sooner rather than later!!

Darkmatt Rating: ööööö (a dead cert for my top ten films of the year)

Read what my new pal Tom thought of it here: kiss-me-no-wait-shoot-me 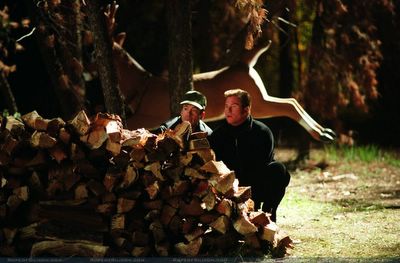 "Bambi on the rampage... just one of the many visual gags in Kiss Kiss Bang Bang"

Finally saw it today... Was very good as you said it would be... But surely that was just an excuse to put a picture of the lovely Harmony Faith onto ur blog?

If this movie is half as cool a the kisskiss-bangbang.com website it should be a massive hit.