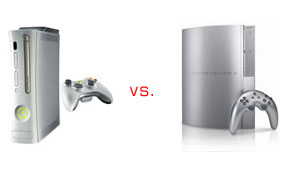 So the Xbox 360 launches in the UK this week (I've played a demo unit and it is "nice enough" but not critically not quite nice enough to make me want one - yet)...

Here are a couple of links to articles about the new systems - looks like the usual new release 'bugs' are hitting the 360 with some machines 'turning themselves off' or 'freezing mid game':
X Box 360 Glitches

My favourite computer games story from the web today is this one taken from: www.gamesasylum.com

Although no doubt intended as a warning to adults buying presents for little gamers, it's possibly more likely to be used as a check list for naughty kids...

Narc - "the ability to kick enemies' heads off"

and for those sick bunnies out there - Resident Evil 4 - "During the first minutes of play, it's possible to find the corpse of a woman pinned up on a wall - by a pitchfork through her face."

As Games Asylum's own Jake Rukin says: "Most of those make the games sound more appealing than any review ever could. And indeed better than they actually are. Great job!"

You have been warned!!

So are you lovin your new 360 or waiting for the godlike PS3... let me know... or read my first thoughts on Narnia

Reviews and other stuff you might want to read indexed here
Posted by Matt Adcock at 10:00 pm

ok i added you in my links.
nice stuff in here.

Me, I'm waiting for the PS3, the talks of problems are way more than "the usual", and the big name games available on release day have been rushed through to make them available.

For example, only last month the Developers were saying there was no way PGR would be ready in time. Microsoft announce it will straight after, and suddenly the Developers are ready to go?

Now they don't have enough units for us all to buy, unless you pre-ordered months ago.

Yeah, forget that. I've got tons of games I'm still playing - like GTA:SA! These will tide me over for the PS3.

There are a number of features I'm more excited about with the PS3 anyway, blu-ray, DVD playing without additional spending, better spec, a new GTA, a new GT, etc, etc.

I am supporting Microsoft all the way on this one, Sony may present a technologically better product but I know that they won't put as much focus on the online features etc as Microsoft have.