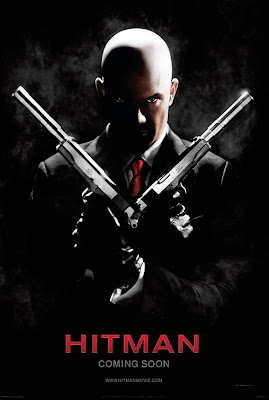 It’s a sad but universally acknowledged truth that computer games making the jump to film have produced more turkeys than you’d find packed into a Bernard Matthews poultry farm in this festive season. So as the ultimate PlayStation game Hitman known only as ‘Agent 47’ is made flesh in Timothy ‘baddie from Die Hard 4.0’ Olyphant – the bets are off that it will result in serious screen suckage.
And I must apologise in advance to my father-in-law who only enjoys my negative reviews – but Hitman manages to buck the turkey trend and deliver some impressively sleek, bold and beautiful big screen thrills.

Don’t expect any element of the plot to make too much sense, just sit back and enjoy the over the top carnage that kicks off when Agent 47 is set up whilst trying to assassinate the Russian president. Pursued by both Interpol (in the hangdog form of Dougray Scott), the Russian secret service FSB (in the form of stupiiid caricature Robert Knepper), and the very organisation that he was created by Agent 47 juggles an impressive array of high-powered weapons and leaves a massive trail of bodies in his wake.

Pausing briefly to save a smokin’ hot, clothing adverse prostitute named Nika (upcoming hottie Olga Kurylenko who you might have also seen in the cool French thriller The Snake earlier this year), Agent 47 carries off some spectacular action sequences that had the row of teenagers behind me whooping and cheering.

Hitman is basically Die Hard: in a suit – but with the twist that you’re rooting for the bald psychotic assassin for hire rather than the fast-mouthed bald cop in a vest. Director Xavier Gens stays true to the look and feel of the Hitman games, this is his follow up to the yet unreleased over here ‘Frontière(s)’ which has a reputation of being one of the bloodiest films ever committed to screen. Hitman doesn’t stint on the violence but uses it in tight controlled bursts that punctuate the fairly predictable ‘rogue agent takes on all comers’ plot.

So if you’re looking for heavy-duty tasty action, complemented with a babe who makes even Bond girls look a bit minging, Hitman will be Christmas come early for you. However if you’re after anything even remotely cerebrally challenging you might want to consider something like ‘Southland Tales’ from the strange mind behind Donnie Darko instead. 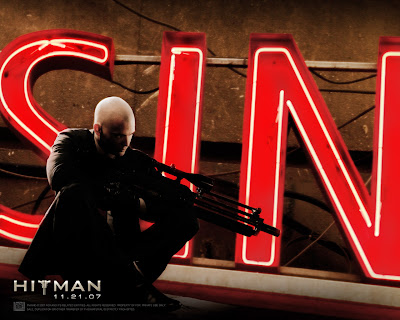 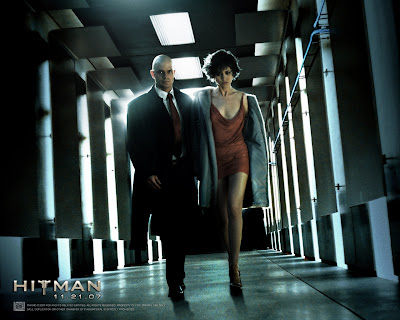 "does a great line in dresses - Miss Kurylenko"