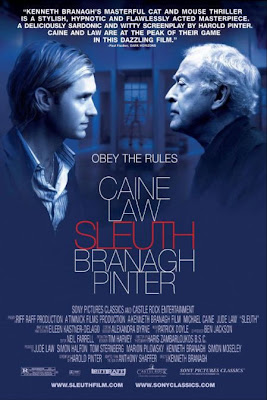 ‘What’s it all about eh?’
This is not just the badly misjudged line swiped from Alfie (the last film where Jude ‘my ego is out of control’ Law vied to become the Michael Caine for a new generation) but also the question most cinema-goers will be asking if they go to see this new version of Sleuth.
Law does his long term career no favours by murdering another classic Caine role in this vacuous, soulless and shambolic update of ‘70s plot-twist overloaded original. The mighty lord Michael of Caine is here too though, now resigned to playing the elder protagonist in this dark battle of wits, just, erm – minus most of the wittiness that made it so much fun before.
Kenneth ‘lovey magnet’ Branagh directs with excess overblown technical whiz but a vapid lack of tension, tricksy delight or interest sustaining action. One has to wonder quite why anyone agreed to take on this thankless exercise in cynical remaking, except to countenance that all concerned are simply too far removed from reality to realise the error of their ways.
The plot sees super rich crime thriller author Andrew Wyke (Caine) going head to head with adulterous hairdresser Milo Tindle (Law), who has shacked up with Wyke’s wife. An escalating bout of one-upmanship ensues, with humiliation, intimidation and even possibly murder on the menu before the scores are settled.
It starts okay, the action having been updated to take place in a gleaming gadget packed high tech abode where motion detecting camera lurk in every corner and everything from lights to moving walls is accessed through Caine’s remote control device. Unfortunately, before you can say ‘hasn’t all this flashy techno gubbins has been thrown in for no good reason?’ you’ll be realising that it’s a technical smoke screen that tries to cover up the weakness of the pared down thrills on offer.
Harold Pinter’s script loses the original’s intricate twists and counter plotting shocks, replacing them with unnecessary swearing and generally less convincing psychological pratfalls. Then there’s the woeful void where the original had arcing chemistry between the two rivals, which leaves these two undoubtedly talented actors acting their socks off to absolutely no avail.
The only acceptable reaction is ‘Meh’ with a capital ‘M’, never have the words ‘style over substance’ been more apt. You don’t need to be an amateur sleuth to deduce that fans of the original should avoid this at all costs, whilst determined newcomers should prepare to be seriously under whelmed. Hogwash… 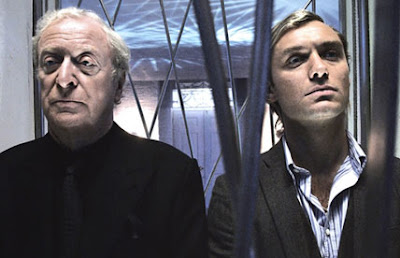 "are you as bored as I am old fellow?"