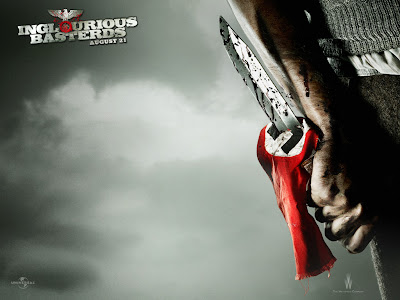 Nazi occupied France is the setting for this blood splattered tale of revenge – told in full riotous energetic ‘Tarantino-Vision.’ There are plots at intertwined here – firstly is that of a young Jewish refugee Shosanna Dreyfus (Mélanie ‘The Beat That My Heart Skipped’ Laurent) who witnesses her family being exterminated by slimy SS Colonel Hans Landa (a fantastic Christoph Waltz) who is known as the “Jew Hunter”. Several years later Dreyfus is given the chance to avenge her family when the Nazi high command decide to host the premiere of their new war propaganda movie at the cinema she now runs. With the promise of every major Nazi officer in attendance, the screening also becomes the target of a British plan to blow the place up and this brings in the "Basterds", a ruthless group of Jewish-American guerrilla soldiers led by the slightly insane Lt. Aldo Raine.

The chapters build up to the fateful night which sees Raine (Brad Pitt on larger than life form) and his men trying to blow up the cinema unaware that Dreyfus has a similar plan. As news filters through that Hitler himself is planning to attend – the outcome of the whole war could be decided on one evening – obviously Tarantino is playing fast and loose with history here.

Inglorious Basterds delivers everything we’ve come to expect from the self confessed ‘cine-nerd-lord’ Tarantino – stirring brutal violence, arrogantly overblown dialogue, cool but naïvely over the top scenes staged to perfection. It’s a madcap clash of harrowing evil, laugh out loud dark comedy and simplistic storytelling – and it works a treat.

Sure Tarantino’s war effort is chock full of references (and blatant rip offs) from pretty much every influential Second World War movie you’d care to name, but he only picks the good bits, so Inglorious Basterds ends up being a seismic home run of viewing pleasure.

Style 8 (the Taratino factor is strong in this one...)

Babes 7 (Mélanie Laurent is yummy, - so is Diane Kruger)

Spiritual Enlightenment 5 (The Nazis had it coming!)

This movie was a good surprise. It was fresh and unique compared to other movies released in the past few years, even if a little violent.

I agree with both of you. It was a great movie and great review.