Darkmatters Review: Let The Right One In 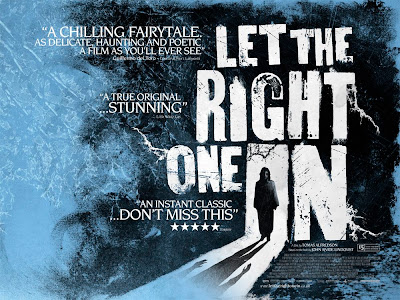 Let The Right One In (15) 'Låt den rätte komma in'
Dir. Tomas Alfredson
Reviewed by Matt Adcock (@cleric20)
Sometimes a film comes along – out of nowhere and speaks to your very core…
That is one of the reasons that I love being a film reviewer, yes there are lots of rubbish flicks that have to be seen but once in a while you find something special… Let The Right One In is a masterpiece. It’s freaky, it’s heartbreaking and grim – but it also has a beating heart of unrequited happiness and innocent joy that transcends the macabre events therein. I saw this back in April on the big screen and have been itching to see it again. Since then I have read the original novel by John Ajvide Lindqvist who also adapted it into the film. The book is excellent too, but darker and full or incidental detail that whist making for a rich reading experience has been wisely exorcised here.
For example, in the novel Eli’s "father", Hakan (played with hound-dog perfection by Per Ragnar), was a paedophile… whereas in the film we’re never fully informed of his motives or inner thoughts – and the back story as to how Eli became a vampire is caustically grim too. Film viewers are allowed the luxury of wondering ‘what if’ instead and it works.
But once you’ve experienced the film, reading the book adds layers to the characters and situations, which may highlight just how far they miss the point in the American remake next year. 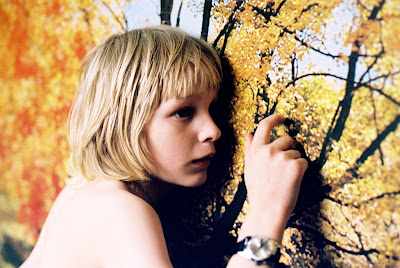 "It's tough being 12..."
Director Alfredson has superbly crafted a film that goes beyond mere entertainment and becomes an experience much greater than the sum of its parts. Watching this movie, you are tapping into a force that can short-circuit you and rewire your emotions. Let The Right One In is the film that Twilight wishes it could have been.
This is the 1980’s tale of young Oskar (Kare Hedebrant) a pale, virtually albino, blonde skinny twelve year old who wears clothes that only his mother could think look ok. Oskar is a bully magnet and his school life is hell thanks to scumbag in the making Conny (Patrik Rydmark) and his gang.
One night Oskar meets a strange girl called Eli (Lina Leandersson), she’s all big eyes and out of place mannerisms, plus she doesn’t seem to feel the cold or know what a Rubik’s Cube is. But an unlikely deep friendship is forged and when on another occasion Eli notices that Oskar has been hurt by the bullies, she tells him he should “hit back” and that if it gets too much that “she can help”… The film’s title comes from a song by Morrissey “Let the right one slip in” which includes the very apt line “And when at last it does, I’d say you were within your rights to bite the right one and say ‘What kept you so long?’” 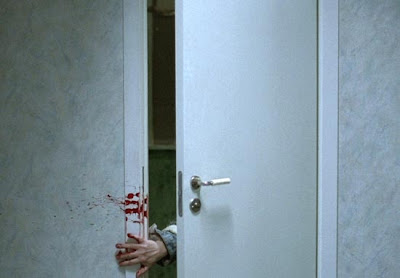 “I’m twelve. But I’ve been twelve for a long time... and you don't want to mess with me...”
This film delivers a rare experience – my wife called it ‘quite the strangest thing she’d ever seen’.
Movies like this are set apart from the run-of-the-mill - you don't just watch Let The Right One In, you feel it too...
Darkmatters final rating of: öööööööööö (10 – this is a rare treat for those who can handle it!)
Darkmatters quick reference guide:
Action 7 (hits hard when it comes, sparingly used 'less is more')
Style 9 (the bleakness drips from the screen)
Comedy 6 (dark dark humour to be found)
Horror 8 (blood is integral to the plot)
Spiritual Enlightenment 8 (friendship knows no bounds)

Great review! I too saw this on the big screen and have been salivating to see it again. I saw an advert for it on TV last night (complete with cheesey voice-over) - i think its released on DVD soon... The wait is over.

I intend to read the book too and hopefully further immerse myself in the chilly yet strangely beautiful world of this story.

Great blog - keep up the good work and stay in touch! :)

i had seen this movie some time back and loved it. Since you have read the book, could you clarify one thing- my friend was suggesting that her father is just another Oskar. It's a cycle that goes on since she's been living for a long time. She needs a person who can bring her victims to her. Though the reasoning seems plausible, has it been mentioned in the book?

Hey Avinash - it's never explicitly stated that Eli plans for Oskar to be her new slave (Hakan) but I think it must be the case. I hope that Eli sees Oskar as more of a friend / partner rather than slave but only time – and possible sequel will tell?

Whilst it’s a great ending on the train, I’d love to see what happened after some years had passed… Would Oskar grow to resent Eli’s immortality and end up a shell of himself like Hakan did? Too many possibilities…

This is one that's been on my radar for awhile and I'm just waiting for the perfect dark, alone night to check it out.