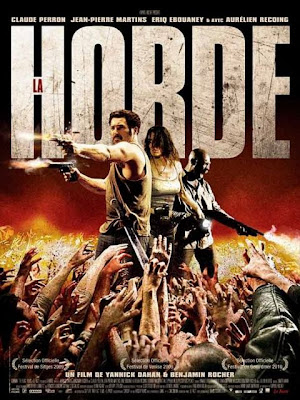 "The Die Hard of Zombie flicks" says Empire magazine… Well that got me interested right from the off (Die Hard is still one of my top 5 films of all time and I’m partial to decent zombie films e.g. 28 Days / Weeks Later).

The French have been making some strong horror films recently (see Martyrs or Switchblade Romance)...

This is a full on zombie-em-up with added gangsters, hard ass cops and a gnarly ‘Assault On Precinct 13 meets Dawn Of The Dead’ feel. The Horde brings satisfying edge-of-your-seat, no-one is safe danger that sees the titular zombie ‘horde’ attacking a decaying tower block as Paris burns around them. 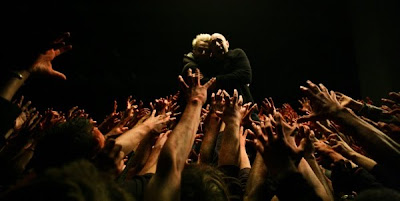 "The Jehovah's Witnesses massed sensing potential converts..."
The human menu of talent include Claude Perron (Amelie), Eriq Ebouaney (Thirst), Aurelien Récoing (Intimate Enemies) and Doudou Masta (MicMacs), as the gang of criminals and their cops nemesis’ but when the zombies turn up it becomes an uneasy alliance in order to survive.

The Horde (Momentum Pictures) hit the UK cinemas on 17th September and DVD this week (20th September) where it comes with Special Features including: ‘Making of’ featurette; ‘Rivoallan’; zombie concept art; storyboards; teaser trailer; Easter Egg – rehearsal of a scene.