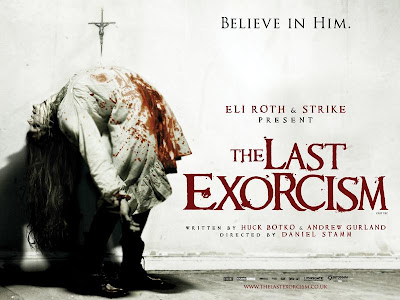 “If you are a Christian and you believe in God, then you have to believe also in demons...”

This is the interesting premise put forward by the reverend Cotton Marcus (Patrick Fabian) – a man of the cloth who has somewhat lost his faith but who continues to preach and conduct lucrative exorcisms.

We join rev Marcus as he employs a film crew to follow him on his ‘last exorcism’ where he will give them inside info about his sham tricks that he uses to scare punters. He chooses a letter at random from a farmer in backwater Louisiana where Louis Sweetzer (Louis Herthum), a serious fundamentalist Christian believes his 16 year old daughter Nell (Ashley Bell) is possessed by a demon.

Before reading the details of the letter, Cotton tells the film crew that there are several things that most suspected possessions have in common – often involving cattle mutilations, and sure enough that is the main thing that farmer Sweetzer talks of in his plea for help.

What follows is the documentary shot of the visit, the exorcism and some very freaky things that occur on the Sweetzer farm. Is Nell actually possessed? Might there be something else sinister going on that could lead a young girl to do strange, seemingly unexplainable acts? Why is her brother so hostile to the preacher and the film crew? What’s the deal with the local minister who hasn’t seen the Sweetzers for the last two years after they fell out?

The Last Exorcism plays it straight for most of the film, building up an engaging sense of wrongness and unease. The characters are well defined and if you’re of a nervous disposition, you might well find yourself getting very on edge as events escalate to the point where even the doubting reverend has to re-evaluate his faith.

"Nell wasn't very keen on being made to watch Hostel pt 2 again"
Unfortunately for viewers, there just aren’t enough pure scares to justify the hype that producer Eli ‘Hostel’ Roth has been working hard to build up. There is also the matter of a rushed and unsatisfying ending sequence that feels like it was ripped from an entirely different film and stitched unconvincingly onto this wannabe spook-em-up. So what starts as a promising battle of belief, ends with an oddball climax that left most of the audience – including my mate Simon – shaking their heads in disbelief at the stupidity we’d just witnessed.

If you’re after exorcism based cinematic thrills – the original Exorcist is still by far your best choice, and even the recent Exorcism of Emily Rose delivers more supernatural bang for your buck than The Last Exorcism.

The Last Exorcism's demon is challenged to a battle by the ones from Emily Rose, An American Haunting and The Exorcist etc. The last demon standing wins the rights to appear in the sequel

Isn't it tragic when a horror flick leaves you feeling flat.So much deflated anticipation, and crushed suspense.I will wait for it to appear on Netflix in the instant que.