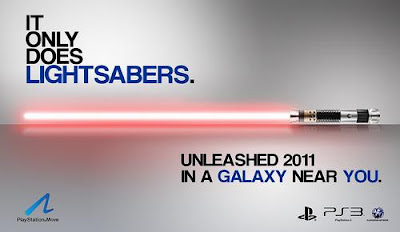 "The force is strong with the PS3 Move"
﻿PlayStation Move shifts 2.5 Million units in 30 days...
Matt Adcock
Sony must be pretty please with the number of people 'Move -ing' as it was announced that the PS3 Move controller has shifted over 1 million  in the U.S. and Canada, plus 1.5 million units in Europe (sourced from the L.A. Times), since launch last month.
With the Move launching in Asia this week, it will be interesting to see how well it sells in the run up to Christmas.
Of course the Kinect 'look no controller at all' camera for the Xbox 360 hasn't actually launched yet so being 2.5 million behind is a temporary state of affairs.
The Move's combined sales seems to have exceeded some analysts' expectations:

"It's ahead of what I thought previously," said Michael Pachter, an analyst with Wedbush Securities. "I think that they are a lock to sell 3 to 4 million by Dec. 31, and a lock to hit more than 5 million by fiscal year end" on March 31.

With LOVEFiLM being launched on PS3 next month - allowing people to view pretty much any film on demand - it looks like PS3 and Move are going to have a very happy Christmas!?

HA HA - nice headline m8!
I LOL'd when I read that - not got a Move myself yet but will be picking up two controllers and The Fight for Christmas.