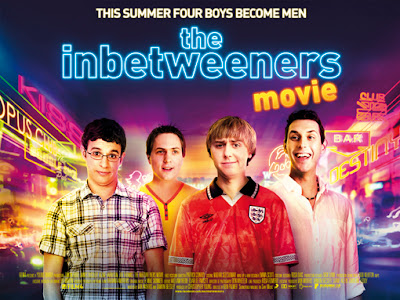 These aren’t rioting / looting chav scumbags either, these are just average young middle England chaps trying to make it through their teen years. Four friends obsessed with girls, trying to be cool, the hope of sex, having a laugh, dealing with embarrassing parents and exploring the finer points of self-pleasuring themselves.

For those who haven’t had the pleasure of meeting the Inbetweeners they are posh nerd Will Mackenzie (Simon Bird), nice but dim Neil Sutherland (Blake Harrison), sex mad wide boy Jay Cartwright (James Buckley) and your average lovelorn teen Simon Cooper (Joe Thomas). So the pals have survived school – the end of which is marked by a superb ‘leavers speech’ by Head of Sixthform Mr Gilbert (Greg Davies) where he tells the kids in no uncertain terms how little he hopes he’ll ever see them again. Be sure to look out for Gilbert again just as the end credits hit as he has a truly unforgettable final cameo! 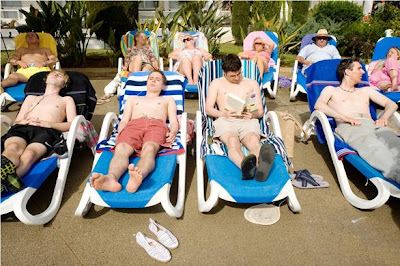 "The boys soak up the rays - shame Will has a cock burnt onto his back!"
When Simon gets dumped by his girlfriend / love of his life Carli D'Amato (Emily Head) , the boys decide that only a sun and booze filled holiday in Greece will be only way to take his mind off it.

So the scene is set for a cringe-em-up horror story of cheap package holiday fun which sees the boys drinking copious amounts, getting ripped off, dancing very very badly and trying with various amounts of success to hit on females.

The writers (Damon Beesley and Iain Morris) bring some fantastic situations to the table, which put the characters through humiliation beyond the call of duty. Think The Office played entirely with work experience kids or maybe a British version of American Pie directed by Francis Ford Coppola and you’ll have some idea what to expect.

The Inbetweeners Movie works better than expected – delivering plenty of ‘wrong’ laugh out loud material, some of which will have you wincing at the screen. If you’re one of the Daily Mail reading reactionaries who knock The Inbetweeners for being overly crass, crude and juvenile then you really need to get over yourselves and realise that stupid and over the top as this might be – it’s probably the best insight into young male minds ever.

And as Jay says: “You better bring your wellies, because you'll be knee-deep in clunge.”

"The females on the town"
Out of a potential 5 you have to go with a Darkmatters:

Awesomeness öööö – you may never forget some scenes

Spiritual Enlightenment öö - what happens on holiday, stays on holiday!? 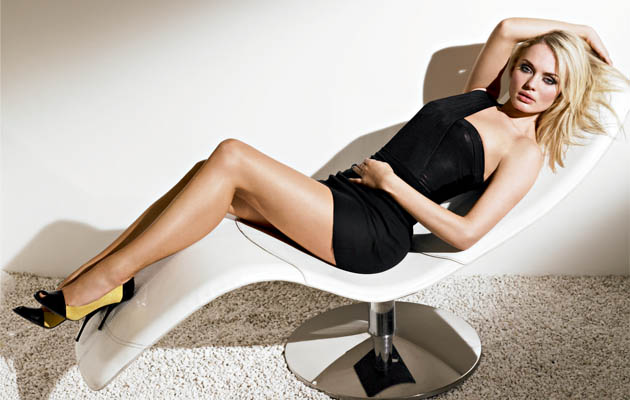 "Laura Haddock - can Will really pull this?"
Posted by Matt Adcock at 4:21 pm