Darkmatters Review: Rise of the Planet of the Apes 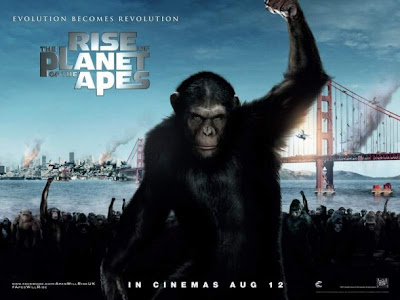 Imagine a new gene therapy that enabled the brain to repair itself – it could be the cure for Alzheimer's, it could change everything…
Of course there will be some who’ll say that we shouldn’t test new drugs like this on animals but with the potential for such great medical progress – surely monitoring the effect it has on a few apes is a risk worth taking? What’s the worst that could happen?

Bio engineer Will Rodman (James ‘new Spiderman’ Franco) is the scientist who created the potential wonder drug ALZ-112. His first ape trial goes wrong but he takes Caesar the child of his brain boosted lab monkey home and raises him in his home. Caesar (played by an amazingly effective motion-captured Andy Serkis) is the most empathetic character in the film – so when he is put in a nasty ape sanctuary and abused it pulls at the heartstrings. In fact I was still rooting for him when he’d managed to assemble of like-minded apes and was battling the authorities.

Rise of the Planet of the Apes as the name suggests is the prequel to Planet of the Apes, not necessarily the Tim Burton effort either. Taking Franklin J. Schaffner's 1968 sci-fi classic as the starting point – director Rupert Wyatt ditches the original’s blatant racism metaphor and goes for a more action thriller build up. The cast which includes John Lithgow as Will’s Alzheimer's afflicted father do all they can but it is the monkey business that you’ll go home talking about.

It’s very well done too – the special effects are eye poppingly impressive and the action scenes rousing. The apes are going down well in the States where this has just become the fourth biggest August film opening ever. 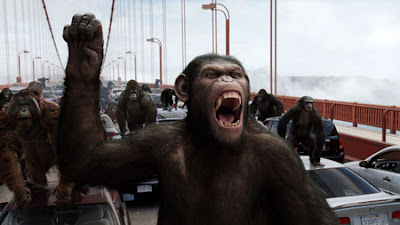 "They may take our bananas - but they'll never take our FREEDOM!"
Rise of the Planet of the Apes is a great fun film – it delivers big time on entertainment and stands out amongst the glut of action flicks hitting this screen this summer by being the only one I really can’t wait to see follow made for.

Here we are then, human, top of the food chain (at least until the sequel) and what have we achieved? Well, on the strength of this - it looks like it might not be too long before the apes get their act together enough to make an exciting film about their own destruction and then pay money to watch it. But hey, until then let’s revel in the fact that we beat them to it!

(4 - quality monkey business that needs to be seen)...

Laughs öö – not a laugh riot but a few funnies

Spiritual Enlightenment ööö - maybe we should keep the intelligence to ourselves?

Email ThisBlogThis!Share to TwitterShare to FacebookShare to Pinterest
Labels: darkmatters, film review, matt adcock, Rise of the planet of the Apes

After reading yours and a few other LAMBs' reviews of this movie, I'm wishing I hadn't shrugged it off quite so easily.

You're totally right about Freida Pinto.