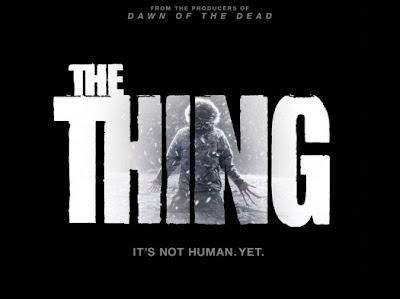 It’s not human. Yet… Actually, it’s not even close!?

If you remember the horror classic1982 John Carpenter version of The Thing with any fondness then you might want to look away now. This new version which is actually a prequel tramples all over the existing good work and replaces the gut wrenching disturbing master class in tension with cheap shock jumps and generic running around being chased by angry alien mutant ‘thing’.

Much like the better ’82 Thing, the story is of an ill-fated team of scientists at an Antarctic exploration site who find a crashed spacecraft and unwisely take one of the presumed dead alien life forms back to their base.

Here’s a quick test you can do to see if you’ve been taken over by The Thing. Ask yourself, is your name Kate Lloyd (Mary Elizabeth Winstead) – if so you’re fine, if not then erm, chances are you’re nasty toothy space beastie just pretending to be human.

I loved the Carpenter version of The Thing but was left really cold by this addition to the franchise. The biting psychological tension of the ’82 film is watered down in favour of stupid B movie gross out ‘shocks’ and monstrous but ultimately ‘meh’ special effects. 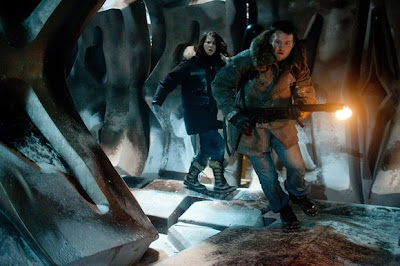 Winstead looks good and does OK in the lead role of the flame thrower happy heroine who comes across as a Ripley-lite. She’s not the sort of girl you want to be friends with though as she dispassionately fries anyone she thinks might be infected without ever looking too bothered by it.

What also hinders the audience buying in to the admitted potentially terrifying situation of being trapped in a remote desolate Antarctic location with a killer alien is the fact that nearly all the rest of the cast are interchangeable bearded Norwegians. So when Olaf, Lars or Henrick gets eaten and mutated it all gets incredibly ‘ho hum’. The director Matthijs van Heijningen Jr. tries to tie the events into the other film but it feels very clunky and nothing here is very reverential to the superior existing material.

Awesomeness öö – nothing very awesome here, move along
Laughs ö – not funny, unless you laugh at beards
Horror ööö – reasonably gross in parts but fake effects don't help
Babes ööö – I love Windstead but not in a massive parket coat
Spiritual Enlightenment öö – burn em all and let God sort em out?