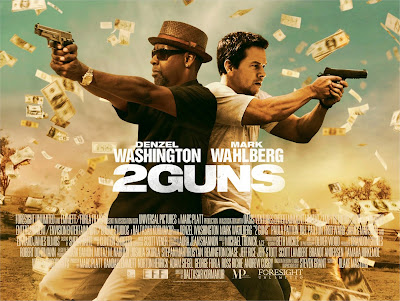 "You're my people and we have a code. You fight for the guy that's fighting next to you."

Meet Robert 'Bobby' Trench (Denzil Washington), an undercover DEA agent who has gone so deep in with the criminals that he's practically one of them...

Then there's Michael Stigman (Mark Wahlberg) who's a sharp shooting Navy Special Forces operative who is trying to bring down a heavyweight scumbag...

Put them together and let the good times roll as they rob a bank (inadvertently stealing over $40 million of the CIA's cash) and that's when things go really nuts. 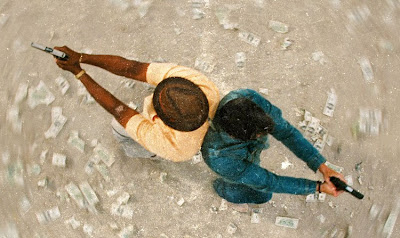 Step forward big bad drug lord Papi Greco (Edward James Olmos) who Trench is trying to set up by engineering a large cocaine deal and convict him. Greco is a nasty piece of work - he keeps the heads of traitors in bowling ball bags, has his men pass the time by shooting the heads off chickens and generally enjoys a spot of torture when not pushing drugs.

Can the two heroes work together a take on not just the might of the drug cartel but also a shady CIA hit team and a corrupt unit of Navy Seals? It's an absolute blast finding out!!

2 Guns delivers some of most fun action I've witnessed on screen this year - the chemistry between the two leads is palpable and it seems like director Kormákur has learnt well from his previous effort Contraband and is now very happy throwing quality action scenes at the viewer.

Sure it's a bit violent and yes the plot takes a few highly unlikely turns but overall 2 Guns is a must see for action lovers. 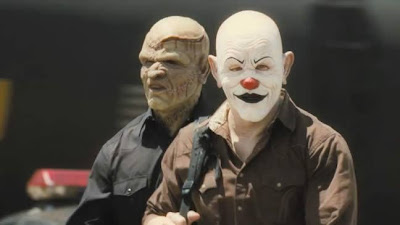 If you like the film (and I've a feeling you will) - then you might want to pick up the graphic novel too upon which the film is based.

Laughs ööö – funny enough to make you smile throughout!

Horror ööö – gets a little nasty at times