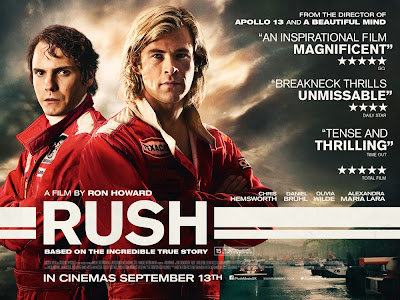 “Everyone’s driven by something…”

You don’t have to be a fan of Formula One to enjoy this fast and furious, action-drama powered not just by the nail-biting racing as by the sexy crackling charisma of Hemsworth who is on top form as Hunt. He is ably backed up by Brühl who is all icy discipline as Austrian perfectionist Lauda., Hunt’s nemesis on the Grand Prix racetrack.

"Things that make you go 'Vroom!'"

Howard directs the film with style and heart, bringing to life the ’70s, which was arguably the most glamorous and dangerous age of Formula 1 racing.

Rush really lives up to its name covering the exhilarating true story of how two people pushed themselves to the very edge of physical and psychological endurance in their desire to win.

Everything works to deliver a superb viewing experience. The racing action rivals the excellent Senna for the title of most edge-of-your-seat cinematic on track thrills. Whilst the personal lives of the two drivers are fascinating as their sheer opposite lifestyles offer insights into the driving styles of these two legends of F1 history. 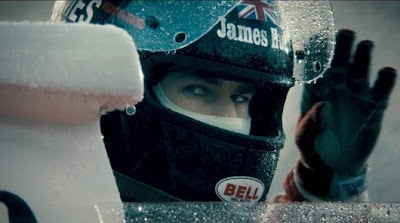 There are some great dialogue lines – enough funnies to make you laugh out loud in places, too. The many love interests of Hunt bring a James Bond-esq playboy element too even though the main females of the film Olivia ‘TRON: Legacy’ Wilde and Alexandra ‘The Reader’ Maria Lara play second fiddle to the two men who eat up the screen with their fierce rivalry.

Rush packs real emotion too – especially in dealing with Lauda’s near death crash, which sidelined him for many races and gave Hunt the chance to wrestle the title from his grasp. Both men are flawed but the actors manage to have you empathize with them – all the while leaving you astounded that this is a true story.

For sheer visceral racing thrills there is nothing else out there to touch Rush and it is definitely a film that deserves to be seen on the big screen. You can almost smell the ‘70s cologne alongside the engine fumes and burnt rubber!? 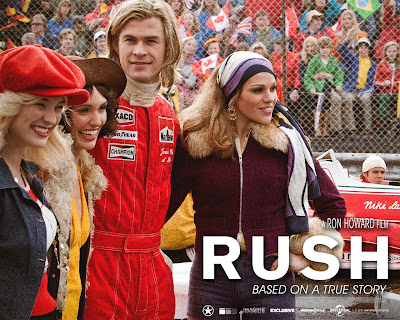 "Hunt 'and friends' at the races"

Awesomeness öööö – racing has rarely ever looked so good

Laughs öö – some very funny scenes but not a comedy

Horror öö – the crash is a bit nasty

Spiritual Enlightenment ööö – being driven can get you results...

A friend asked how he might tempt his wife to go see RUSH with him - well all I can offer is this gif of a shirtless Hemsworth: