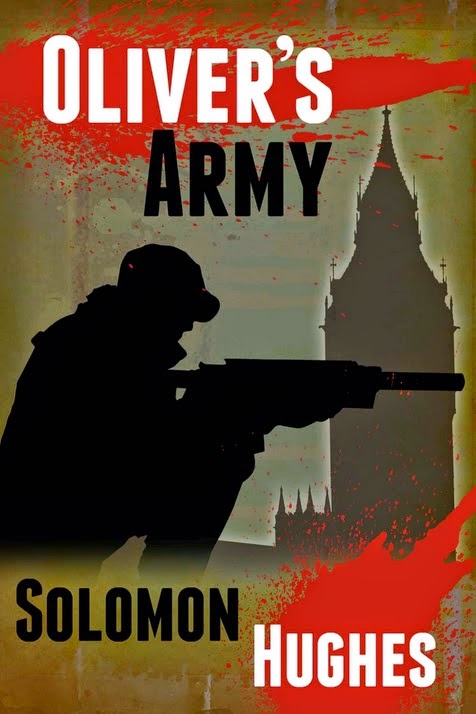 ‘Oliver’s Army is here to stay,
Oliver’s Army are on their way,
And I would rather be anywhere else than here today …’

Here’s a promising debut thriller – that takes a non-compromising look at the murky situation that exists around the awarding of military contracts to private companies in places like Iraq.

Author Hughes who writes for journals including Private Eye seemingly brings his work home with him and writes from what he knows as his ‘hero' - parliamentary researcher Danny Patten, spends his time finding and leaking stories about official wrong doings to various media titles.

Patten however gets in over his head when he starts to unpack the dodgy contractual negotiations and blatantly wrong violent actions of privatized ‘mercenary’ companies who are making money from Western governments.

Oliver’s Army certainly goes a bit deep into the level of detail about government policymaking and the day-to-day work of those tasked with researching for MPs. To be honest there were some sections that left me yawning but the sheer ballsy wider story kept me going with the threat of violence.

It is an unsettling read due to the very believable points made about the wholesale corruption and misappropriation of funds that we all know is probably going on but don’t like to think about too much!?

Hughes will probably spit but I somehow found myself somewhat rooting for the baddie of the piece = a former Army Major named Oliver Fitzwilliam (hence the title I’m guessing) who is trying to score a big payday by landing his frankly useless and corrupt merc group called Frontier Tactical Services a big Government contract.

Whilst more at home but somewhat incompetent in the field, it turns out that Oliver is the very ‘Mr Bean’ of mercenaries and his inept crew are comic in their attempts to menace those in the know in London.

Oliver’s Army is a fun read overall – worth a look for those who are fans of conspiracy-em-up fiction such as Christopher Brookmyre. I’ll leave the last word to one of the ‘fictional’ mercs in the novel:

“Hey look, in case you hadn’t noticed, killing people for money is kind of what we do.”