Read the newspaper version of this review at: The Biggleswade Chronicle

“You're here because I'm incapable of leaving you alone.”

"no product placement was harmed in the making of this film"

She’s attracted to him, he’s besotted with her – but rather than follow a traditional romance timeline there are some rather nasty complications to this potential relationship. Grey you see isn’t looking for a romantic partner, he wants a woman to control, to hurt and punish sexually in his own ‘red’ torture playroom.

Steele is rightly perturbed by Grey’s behavior - he basically starts to stalk her from their first encounter and is quite willing to whisk her off in his helicopter, or show her his impressive car collection, but he won’t go on a normal date with her. His sinister coldness reinforces her reluctance to sign the freaky ‘sexual relations’ contract that sets out exactly what he can do her.

Anastasia though is a woman with her own mind – and one who is wary of this unusual set up. Doesn’t stop her getting to experience some grim situations though after requesting Grey to show her how bad it might get if he were allowed to punish her…

*caution spoiler* I was pleased to see Steele challenge Grey about his nasty requests and make a stand at the end despite her attraction to him *end spoiler*.

Director Taylor-Johnson I guess deserves some credit for managing to turn the terrible source material into even such an average film. But Fifty Shades of Grey is mostly vacuous production values over substance, boasting little more than multiple sex scenes and a number one single from Ellie Goulding on the soundtrack. 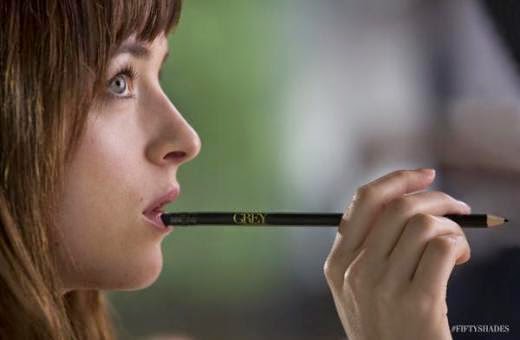 "what colour pencil shall I use?"

Sorely lacking though are decent performances, Johnson does an acceptable job (mostly biting her bottom lip) but Dornan is totally wooden, playing every scene with the same permafrown – looking for all the world like he’s just stubbed his toe.

You know if you want a much better cinematic tortured billionaire - you should go with Bruce Wayne, he's got issues too but he uses his money to fight crime rather than abuse women.

This is not a good film by any criteria, alas that hasn’t stopped it already ‘dominating’ box office records – come on people you don’t have to ‘submit’ to this drivel.

Awesomeness öö – the cars, helicopter and glider scenes are quite cool

As a Christian I've been interested in seeing the 'religious' reaction to this film - my review is written for secular press but if you want to get some review / reactions written explicitly for religious audiences I can recommend: