Matt is Dragged Across Concrete (review) 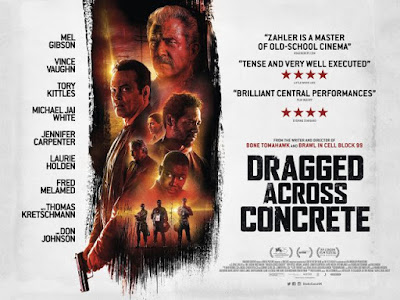 
“Do not prioritize money over having a heartbeat.”

From the slightly twisted mind behind Bone Tomahawk comes this violent tale of two overzealous policemen, old-timer Brett Ridgeman (Mel Gibson) and his volatile younger partner Anthony Lurasetti (Vince Vaughn). The duo get results but work in a no-nonsense old school style which leads them to getting suspended when a video of their very strong-arm tactics against an ethnic drug dealer gets leaked to the media.

Both have cash issues – and people who need them - Lurasetti is about to propose to his girlfriend, Ridgeman’s wife is suffering from MS and his daughter keeps being assaulted in the dodgy neighbourhood where they live. With seemingly no other options, these two embittered men descend into the criminal underworld to try and gain their just due, but instead, find far more than they wanted awaiting them in the shadows. 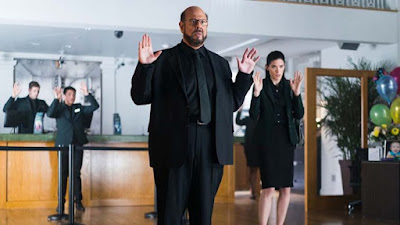 
Director S. Craig Zahler is on top form – having already written and directed two brutal masterpieces across different genres, Dragged Across Concrete sees him add crime-em-up to his resume. This would play as a hard-boiled Bad Boys kind of ‘buddy cop’ movie were it not so gut-wrenchingly violent. Zahler has a knack for creating characters who viewers want to spend time with and Gibson and Vaughan are both great here.

The script is packed with sharp, witty dialogue and the action takes its time with a slow burn build up where we get invested in the lives of the characters. This makes it oh-so-much worse when bad things happen and be warned - Dragged Across Concrete gets very dark.

Coming in at an epic 159-minute running time – the plotting is so good that the time flies by. It’s been a while since a crime thriller (or Mel Gibson for that matter) has been as compelling – if you love heist movies such as Reservoir Dogs, Hell or High Water - then this may well be a potential film of the year for you. 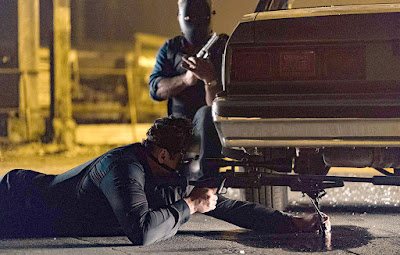 Some have complained at the use of such potentially gratuitous violence, but it feels connected and really resonates when it hits – the climactic shootout is actually one of best I’ve witnessed. The cold, hard cinematography employed world Zahler is a perfect foil to the moments of sentiment such as new mother (a great cameo from Jennifer ‘Emily Rose’ Carpenter) who has to return to work.

Dragged Across Concrete is a stunning grindhouse crime noir, recommended but only for those who can deal with the evil that men do…

Spiritual Enlightenment ööö - Some things are worth fighting for, but how far is too far?