Darkmatters Review: The Mirror and the Mountain

The Mirror and the Mountain

Fantasy fans (and Netflix children’s series commissioners) would do well to have a look at Luke Aylen’s The Mirror and the Mountain which is a kinda Narnia-em-up shot through with elements of Bridge to Terabithia and has the general feel of a George MacDonald story – especially The Princess and the Goblin.

This is the tale of how Summer and Jonah, two 11-year-olds, go on a life-changing adventure in a magical kingdom known as ‘Presadia’. In C.S. Lewis / Lewis Carroll style – the gateway between our normal world and this other is through an enchanted mirror – found via an old underground passage under a church.

What transpires in the war-torn kingdom of Presadia is your standard ‘quest to find the long-lost king’ deal and it packs plenty of the usual fantasy tropes of dragons, misty mountains, dwarves and elves along the way. Now before you go thinking this might be a younger Game of Thrones, it is very much a light and entertaining romp, without too much peril and absolutely nothing too nasty apart from an insidious fog that hangs over the land.

Aylen’s prose is concise and colourful, and owing to the publisher being a Christian organisation the plot also makes some important lessons around pride, greed, and how the tongue might be your own worst enemy. 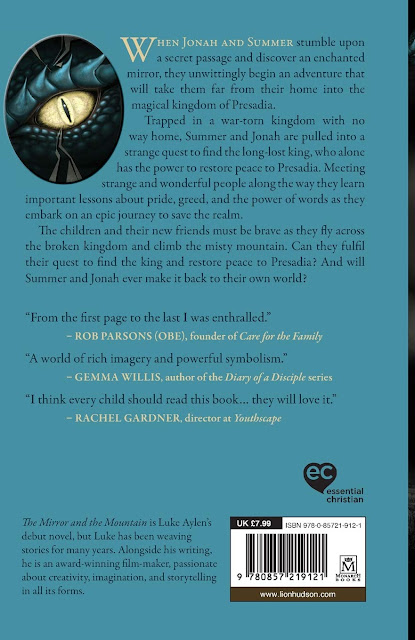 It’s a fun a cheerful read which I’m sure children will enjoy and due to the biblical interlinkage at the end it has scope to be used by children’s workers in churches etc as well as parents who want to drop some meaningful conversation into their bedtime stories.

It would certainly make a fun animated movie or live-action fantasy and I look forward to reading the next in the series.

So for those whose kids aren’t quite ready for His Dark Materials or even Harry Potter – The Mirror and the Mountain is a great starter fantasy which will hopefully fire up imaginations and as readers join the heroic kids’ quest to find the king and restore peace to Presadia.

Want something a little darker?