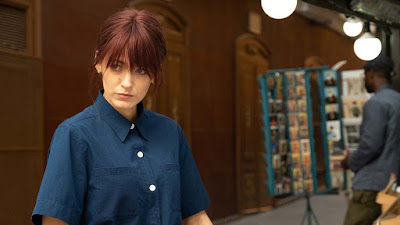 Stop me if you’ve heard this before but a ‘normal’ girl whose life has been wrecked is given training and funds to become a hitwoman. Yes, this is the plot of classics like La Femme Nikita, decent efforts like Atomic Blonde or Red Sparrow and some fairly forgettable flicks too.

Alas The Rhythm Section finds itself firmly in the ‘forgettable’ category. This is despite packing a great cast with lead protagonist Stephanie Patrick played by Blake ‘Savages’ Lively. She’s the civilian who is turned into a spy/assassin by Jude Law – playing her mentor Iain who is ex-MI6 and in the business of training new spies. This of course is rather than tracking down an anonymous terrorist who blew up the plane Stephanie’s family were on himself, oh no, he’d rather spend months in Scotland doing a Rocky-lite training montage with her.

Lively and Law do their best, bringing their extensive acting experience to the party but despite this - there is nothing redeeming about this dull franchise-wannabe. The Rhythm Section obviously wants to be a gritty action film but it fails to make you care much about any of the characters, so viewers really aren’t invested.

What we’re left with is a bit of shonky film, lots of shaky handheld footage – the cinematography isn’t great with only a frantic car chase raising the pulse for a few minutes. Even in these locked down times after an hour my wife and I mostly had enough and were yawning.

Stephanie’s switch from washed up drug addict and prostitute to weaponized bad-ass assassin isn’t very believable even as she struggles with her initial ‘hits’. The wince inducing plot crutch of relying on handy coincidental events just to survive as she struggles to get her killer instinct into gear.

If you want to find a way to enjoy The Rhythm Section – I’d suggest you play action/spy film cliché bingo:
Struggle to actually kill target on first hit? Oh yes. Pretend to be sex worker to get close to high roller baddie? Yep. Shootout in close quarters with unexpected security goons? Of course. It’s not awful but it doesn’t excite like it should.

With so many great revenge-em-ups out there, this feels very unnecessary and is probably one best left for when it comes to the free to view channels rather than splashing out on a to see it now.

Awesomeness ööö – Some of the set pieces work well

Spiritual Enlightenment ö - What does revenge get you?