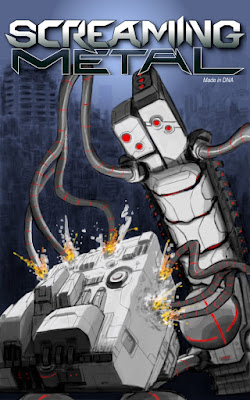 
"Expanding outward as if reaching for her face, several spider-legged flashes danced before her eyes before dissipating.

Priyanka blinked away the afterflashes..."

Meet Priyanka and the crew of the 'Alley Cat' - think Serenity from Firefly and you're in the same galaxy not so far, far away... The heroes here are 'junk-mercs,' a specialized kind of bounty hunter who search for Metal 'braincores' which are the 'minds' of rate alien machines (def nod to Iain M Banks) but the 'Metals' as they're known are now non-functioning chunks of alien tech.

The action cracks along as the Alley Cat crew get wind of detailed coordinates for their latest hunt. But this one is different - apparently the very machine they are after is the one sending the info from its functioning braincore!?

This job in the depths of a starship junkyard on the planet 'Shake Hands' might be more perilous than anything they've faced before - the colonists talk of the junkyard being haunted and Priyanka isn't the only one interested in the potential technological haul there...

With time running out and a heavily armed starship closing in... Well I'm not going to give any more of the plot away - just needless to say that if sci-fi is your cup-of-tea, Screaming Metal should be high on your reading list. 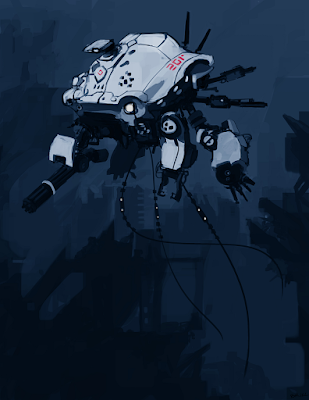 Inspired by works like Makoto Kobayashi's Dragon's Heaven, Fred Saberhagen's Berserker series, and the wildly imaginative adult-level reader (but not adult content) stories within Heavy Metal Magazine among others. At its core, 'Screaming Metal' is action-adventure sci-fi set on a distant planet in the far future, featuring sentient AI mecha of a mysterious alien origin.

The writing from Made in DNA is crisp and tight, much of the narrative is explained in dialogue exchanges and as such Screaming Metal would make an excellent anime or animated short film. Slotting in alongside the recent Altered Carbon Resleeved or the classic AniMatrix.

I found myself caught up in this fascinating fusion of ideas which give a fresh new perspective on ground that many others have covered.

What else can I say but to drop a tweet-worthy and only slightly borrowed tag line:

(5- Engage your braincore and scream for more...)