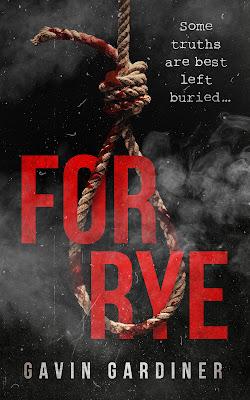 “ ‘The mans a damned hatemonger…’ Trembling fingers tugged at his yellowed clerical collar as he spoke.”

Some truths are best left buried – reads the blurb on Gavin Gardiner’s debut chiller and for the weak of heart that’s a fair warning... FOR RYE is a heavy-duty horror that feels like vintage James Herbert (and I say that as a huge Herbert fan – Sepulchre being one of my all-time fav books).

What we have here is the unhappy tale of Renata Wakefield, a traumatised romance author with a history of abuse who is on the brink of suicide. Her life gets worse when she has to return to her unfriendly childhood hometown of Millbury Peak where the locals are about as welcoming as the League of Gentlemen and her nasty father awaits. The reason for her return is that someone has murdered her mother in a ritualistic slaughter – in the local church no less. 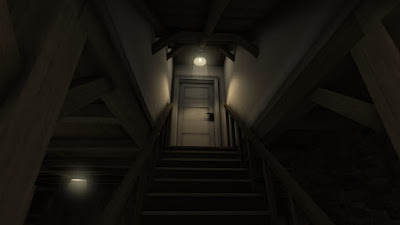 Renata becomes involved with the world’s leading writer of horror fiction - Quentin C. Rye – whose presence in Millbury Peak might be more sinister than anyone could imagine. As the plot creeps along with a growing sense of voodoo menace, the players' lives intertwine in despicable ways.

What is the reason for the killing? Why does Rye want to film his latest movie in Millbury Peak? Can Renata find a way to forgive her abusive father who is now ill and requires care? You’ll have to read to get the answers and I recommend that you do.

Gardiner writes with an acid wit and an impressive grip on what it takes to horrify. Be warned that there are scenes that are extreme, FOR RYE is no lightweight horror but a full-on demonic chalice overflowing with evil deeds and mind-bending situations. 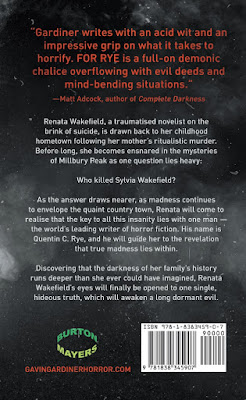 'nice back cover quote!'
I’ll be excited to see what Gardiner writes next – this is an impressive debut by the potential new king of UK horror…

(5- An excellent new horror voice has arrived...)
Buy your copy of FOR RYE here

It's an honour to have such high praise from an author I respect so much. Matt, you're a gentleman and a scholar. Cheers, my friend! Renata sends her regards...