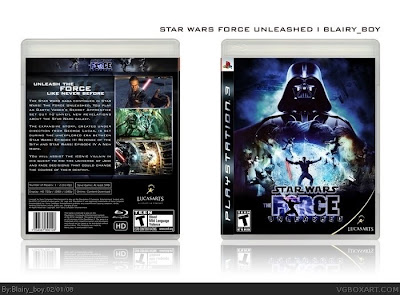 I must straight away declare an interest here – I’m a massive Star Wars fan. A New Hope was the first movie I saw in the cinema (I was 6, it wasn’t even called part 4 back then…) and my eldest son is named ‘Luke’ so I can every night tell him “Luke – I am your father” in my best Vader voice… This Christmas I will again tell him that “Luke – I have felt your presents” and laugh to myself but at least you get the idea…

So I felt a disturbance in the force when I heard that Star Wars: The Force Unleashed was arriving for consoles (my weapon of choice being the PS3). Whatever your feelings for the extended Star Wars saga, most of the games based on the material have sucked, perhaps Battlefront was fun and Jedi Knight okay? Anyway, The Force Unleashed takes place in the dark era between Star Wars: Episode III Revenge of the Sith and Star Wars: Episode IV A New Hope. You get to become Darth Vader's ‘Secret Apprentice’ tasked with exterminating the last of the Jedi… Equipped with a trusty red glowing light saber, the instructions are to leave no witnesses (Vader doesn’t want anyone tipping off the Emperor that there’s a new Sith in town) – slaughtering Storm Troopers, Clones, Jawas, various robots and all kinds of other creatures in the order of the day. It’s less ‘Order 66’ and more ‘Order 666’… Leave your mercy at the door!

Sorry – got carried away there and it’s easy to do because The Force Unleashed gives you all the powers of a Sith Lord – so get ready to force grip, force push and rain burning force lightening down on your Jedi foes. 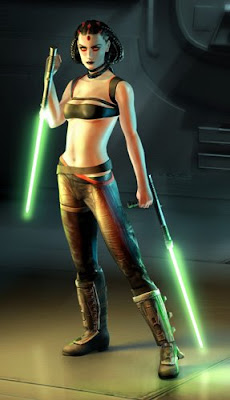 Praise Yoda for some shiny new technology that’s makes this possible - Digital Molecular Matter (DMM), by Pixelux Entertainment, and euphoria by NaturalMotion Ltd. are the coolest physics systems around - everything reacts pretty much like it should - wood breaks like wood, glass shatters like glass, Wookies scream with impotent rage as you pick them up using the force and fling them off cliffs etc…

As you progress through the levels which are nicely varied such as on board spaceships, on various planets etc you can level up the secret apprentice in a RPG lite system that works well. There’s joy in unlocking new costumes and tinkering with your light saber (as in changing the power crystals etc – I don’t know what you were thinking)… and very satisfying it is too. But nothing compares to the adrenaline rush of evil glee that ripping through a battalion of storm troopers and bringing down an AT ST by slicing it down the middle single handed… You'll even get chance to go one on one with Lord Vader and perhaps most excitingly of all - Darth Maul, bring it!!

Sure some of the levels have some crunching difficult sections or annoyingly ‘unfair’ elements that will require repeated trial and error but the cut scene rewards at the end of each make it very worth while sticking with it. Make it to the end of the game and you’ll even have the chance to change the future path of events in a jaw dropping alternative ‘Dark Side’ ending that would negate what happens in the films IV – VI… Shocking but cool!

If you’ve ever had any love for Star Wars, then this should be a must buy. The story works really well – the action is pure ‘wish fulfilment’ and there are even new Star Wars figures in the shops to collect (guess what my sons are getting for Christmas…)

As Vader once said: “You underestimate the power of the Dark Side. If you will not fight, then you will meet your destiny.” It is your destiny to buy and enjoy Star Wars: The Force Unleashed - may the force be with you!! 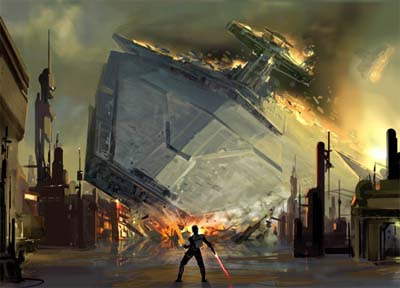 "If you take on the Emperor, expect some serious situations to arise..."
Posted by Matt Adcock at 11:39 am

Not too short then? I've heard it's about six hours gameplay and the level/boss idea is a little repetative.

Hey Rich - You could call it short but I'd take around 8 hours of new Star Wars goodness (where the production levels are kept high) over a few weeks of tediously spun out rubbish. It might not offer the life eating properties of GTA or Oblivion / Fallout but it does what it sets out to achieve - and I've just heard that there will be new levels and characters coming in the form of Downloadable content for the PS3...
Yes please...
Should fill a gap until Little Big Planet arrives - check this excellent article on it: http://www.clockworkmanual.com/2008/10/littlebigplanet-it-will-not-be-stopped.html
- the words 'can't wait' spring to mind!!

If only I wasn't a poor humble student...

WEll it's 8 hours of your life you can at least enjoy! unlike the new RE5 which is a bit disappointing if you played RE4 it's pretty much the same but oh well. have seen some pretty good playstation 3 80gb deals just in case you need?