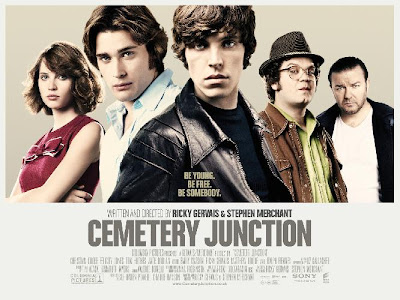 There comes a time every man’s life when he has to make his mark, decide what he’s going to do with his life and head out into the wider world.

Cemetery Junction is the 1970’s chronicle of three best friends – first up is young Freddie Taylor (Christian Cooke) a decent chap who has dreams of trading in his factory job for the white collar world of insurance sales. Then there’s charismatic rebel without a cause Bruce Pearson (Tom Hughes) who has a nose for trouble and is wasting his life away. Finally is ‘Snork’ (Jack Doolan) – the fat comedian of the bunch who gets lots of the best comedy moments and a running gag about his self designed tattoo which adorns both his chest and his back.

The one thing that these pals have in common is being trapped in the titular backwater of Cemetery Junction, where life is slow and options for excitement are limited to fighting, drinking and painting boobs and cocks on advertising posters.

Directors Gervais and Merchant effectively channel their patented bittersweet comedy drama of ‘The Office’ and ‘Extras’ into this film which mixes laugh out loud comedy with pleasing swirls of darker emotion. And unlike Gervais’ poor ‘Invention of Lying’, where viewers really didn’t like or care about the characters, Cemetery Junction sucks you in to the life and love issues faced by the three pals.
The directors pop up in cameo roles, Gervais as working class father of the main character who gets to rant some Daily Mail special bigotry and Merchant who might only be on screen for a minute but who still manages to deliver a killer comic sound bite.

Plot wise the film doesn’t do anything very different from many of other coming of age tales but the time flies by in an energetic good natured whirl backed up by a kicking ‘70s soundtrack. Ralph Fiennes delivers a quality turn as a Cemetery Junction boy who did good but lost his soul in the process. Will Freddy follow in his footsteps or might he find Fiennes’ daughter (the lovely Felicity Jones) a more attractive escape route?

Anyone who had first hand experience of the 1970s will find lots to enjoy from the excellent attention to detail which as a ‘70s child I found resonated strongly. Cemetery Junction is a film with lots of heart, it delivers a good night out and will make you laugh, think and appreciate life – what more could you ask for? 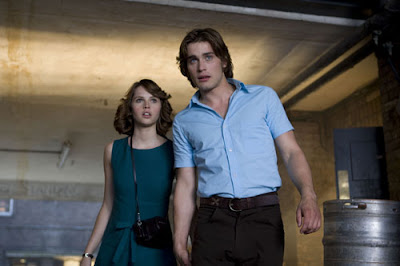 Gervais’s character gets into a verbal sparring match with Snork over who is the chubbiest...