Darkmatters Review: Clash of the Titans 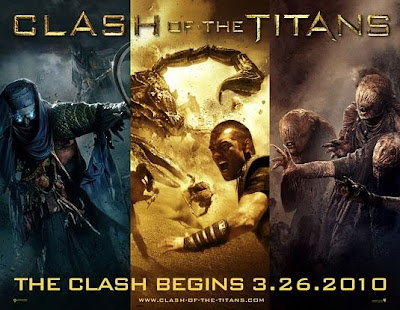 Welcome to new re-take on ancient Greece, a place where mythological beasties run rampant and neither god, nor man is free from a truckload of CGI special effects being poured over them at any time…

Director Louis ‘The Incredible Hulk’ Leterrier brings this flashy update of Desmond Davis's 1981 fantasy epic to the screen in unnecessary and unconvincing 3D. I saw the original as a boy and was blown away by the incredible (for their time) effects of Ray Harryhausen's stop-motion creatures. This time I was less impressed although having said that my youngest son James really enjoyed it so perhaps you just need to be the a kid to get the most from this tale of swords, sandals and massive legendary monsters?

So it seems that Father of the gods Zeus (Liam Neeson, in a sparkly suit of armour) has a beef with his evil brother Hades (Ralph Fiennes, traveling around in a dark cloud) when the citizens of Argos stop praying to him and his godly pals. Hades gets licence to unleash his pet super-weapon ‘the Kraken’ to destroy the whining humans or make the shoppers, sorry inhabitants, of Argos turn back to the gods. The only get out clause is if the people sacrifice their hottie princess, Andromeda (Alexa Davalos).

Things certainly look bleak for us mortals but fortunately we have young demigod Perseus (Sam ‘AVATAR’ Worthington) on hand – he embarks on a mission to find a way to kill the Kraken and save the princess. This quest sees Perseus come up against CGI obstacles such as giant scorpions, a Darth Maul alike apprentice to Hades and Medusa the gorgon who is queen of the visual effects.

So the plot is of the simple, go here, kill baddies, get back and kill the big baddie variety but it is simply a backdrop to upon which Leterrier stages his set pieces. The special effects vary from the sublime snake headed Medusa through to the ropey bat demons and less than impressive climactic Kraken. As I mentioned the 3D version here feels like it was tacked on at the last moment and doesn’t add anything to the film.

Worthington does an ok job in the lead role while the gods ham up their parts like they’re immortal souls depend on out camping each other. Hot Brit actress Gemma Arterton is gives good support as ‘Io’ but there is little here to recommend it beyond being some lightweight mythological eye candy.

want to catch up on the original - on Blu-Ray? click below...

Email ThisBlogThis!Share to TwitterShare to FacebookShare to Pinterest
Labels: Clash of the Titans

great review I rather enjoyed it. Also gotta say you got a pretty sweet blog. Your articles are well written and you do a good job. I'll keep my eye on this one.

Love your rating system! And welcome to LAMB!