Darkmatters Review: Bunny and the Bull 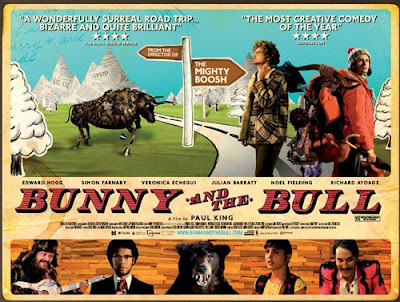 “Much has been written about the art of bullfighting, but I can sum it up in one sentence: get out of the way of the bull, you idiot! Otherwise he will rip open your anus like it was a cheap Velcro wallet...”

Thus is the wisdom from this heartbreaking road movie from writer / director Paul King (The Mighty Boosh), which takes place mostly in the head of poor Stephen Turnbull (Edward Hogg)… and features a climactic showdown between Bunny and a Bull.

Stephen hasn’t left the house for months due to a traumatic event that happened a year before – more on that in a minute. Stephen’s best friend Bunny (Simon Farnaby) is a free living spirit, a man who can’t resist a challenge, a foxy female, or the chance to gamble… Bunny’s idea to liven up their existence – and help Stephen move on from being dumped into the ‘lets just be friends zone’ by the love of his life Melanie (Madeleine Worrall) – is to take a Euro road trip.

Things get nicely out of hand as the pair of pals encounter all sorts of colourful characters and find themselves in all sorts of weird and wonderful situations. If you like ‘The Mighty Boosh’ – you’ll be prepared for their surreal flights of imagination and crazy / silly fantasy ponderings. Bunny and the Bull delivers an amazing, poignant, head trip that deals in love, life and the universe.

Central to the plot is love interest waitress Eloisa (Verónica Echegui) who becomes Stephen’s infatuation and Bunny’s plaything – the love triangle storyline works really well – managing to be really funny and equally unsettling. Channeling Monty Python, David Lynch and Gilliam all at the same time, this is a welcome and highly refreshing new entry into the British film cannon. I can only recommend that you take this trip with Bunny and the Bull as soon as you can!!

why not buy Bunny and the Bull here? 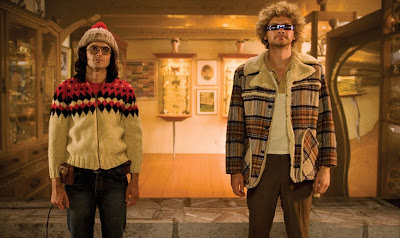 "Stephen and the Bunny"
Get some more Boosh in your life:
Posted by Matt Adcock at 12:34 am

Email ThisBlogThis!Share to TwitterShare to FacebookShare to Pinterest
Labels: bunny and the bull